A video has been viewed millions of times online in Indonesia alongside a claim it shows planes spraying substances that can make people ill with Covid-19 symptoms. This is misleading. Scientists say overwhelming evidence shows the virus is generally transmitted from person to person. A spokesman for the Indonesian Air Force told AFP the claim was "a hoax" and that the planes in the video are not Indonesian. AFP found they are actually modified military aircraft used to fight forest fires in the United States. Part of the footage predates the pandemic.

It shows an orange nozzle attached to a plane spraying liquid. It then cuts to a clip of two planes emitting water as they fly through the sky.

Translated to English, the Indonesian-language text superimposed on the clip reads: "Do people in the whole of Indonesia suffer from sore throat, chills, and fever, headache, body aches?"

The post's caption reads: "The cause of sore throat and fever everywhere." 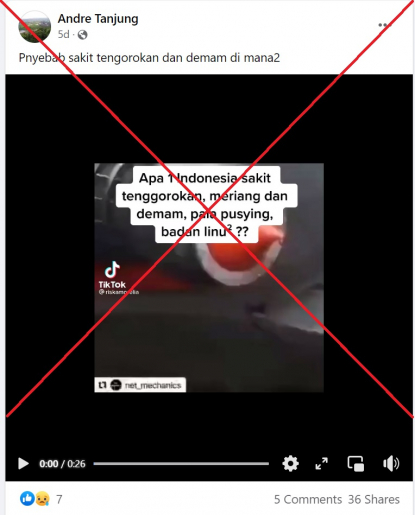 The clip was shared as Indonesia suffered a surge in Covid-19 cases caused by the Omicron variant.

The same video was also viewed more than 9.6 million times after it appeared alongside a similar claim here, here, and here on Facebook; here and here on Instagram; and here on TikTok.

Scientists agree that the SARS-CoV-2 virus, which causes the disease Covid-19, is generally transmitted from person to person.

The virus is typically transmitted between people "who are in close contact with each other", according to this article from the World Health Organization (WHO), which was last updated on December 23, 2021.

The article continues: "The virus can also spread in poorly ventilated and/or crowded indoor settings, where people tend to spend longer periods of time.

"People may also become infected when touching their eyes, nose or mouth after touching surfaces or objects that have been contaminated by the virus."

Covid-19 symptoms can include sore throat, cough, fever, chills, headache, muscle and body aches, according to the US Centers for Disease Control and Prevention (CDC).

Air Commodore Indan Gilang Buldansyah, spokesman for the Indonesian Air Force, told AFP that the planes in the video are not Indonesian planes.

"We can confirm that [the claim in the post] is a hoax," he said. "Every aircraft flying above the Indonesian territory, their position, types and missions are monitored by Indonesia's air defence radar."

A keyword search found an identical video was previously posted on Instagram here on the account @net_mechanics on July 26, 2021.

The post's caption "C-130 Hercules" refers to a type of military aircraft built by Lockheed Martin.

The emblem seen on the plane is a US Air Force logo.

Further keyword searches found the first nine seconds of the misleading video were taken from this video, uploaded by the Defense Visual Information Distribution Service (DVIDS), part of the US Department of Defense, in May 2021.

The same aircraft was featured in this article on the US Forest Service's website.

According to the article, several C-130 Hercules planes have been fitted with Modular Airborne Fire Fighting Systems (MAFFS) to carry fire retardants to fight forest fires in the United States.

Below is a screenshot comparison of the video in the misleading post (L) and the DVIDS footage (R), with matching features marked by AFP:

The same orange spraying nozzle and aircraft can also be seen in this video about the annual MAFFS training in North Carolina in May 2016.

They are also featured in this YouTube video, posted by The Daily Aviation, an aviation news channel, on September 9, 2020.

It is titled: "The US Invented this Awesome Plane Against Forest Fires: C-130 Hercules MAFFS."

The remaining part of the clip, which shows flying aircraft, is identical to this 2018 footage from DVIDS, from the four-minute mark.

The DVIDS footage was filmed during a MAFFS training day in Port Hueneme, California, on April 25, 2018, using C-130 Hercules planes, according to the original caption.

"Local media was invited to a photo, video, and interview opportunity. They got to take a look inside the MAFFS aircraft while the aircrew refueled and refilled the water tanks.

Below is a screenshot comparison of the clip in the misleading posts (L) and the original footage (R), with matching features highlighted by AFP:

According to the US Fire Service, the fire retardant used to control forest fires contains mostly water and fertiliser, and has been categorised as "practically non-toxic" for humans.