Social media posts feature an alleged CNN tweet that claims American actor Steven Seagal took up arms alongside Russian special forces in Ukraine. But CNN said the tweet -- which includes an image of Seagal in fatigues and carrying a weapon -- is fake, and his representatives also rejected the claim, saying the actor wants peace for both countries.

"Intelligence agencies from around the world have spotted American actor Steven Seagal among Russian special forces positioned around the outskirts of Gostomel airfield near Kyiv captured by Russian airborne troops," said the text of what appeared to be a tweet from a verified CNN account, which controversial podcast host Joe Rogan shared on Instagram on February 28, 2022. 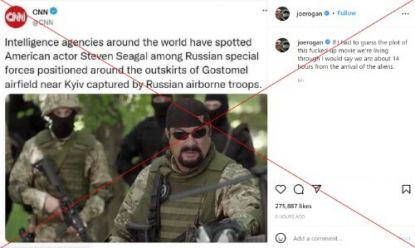 Rogan later removed the post, saying: "I deleted my earlier post about Steven Seagal being in Ukraine because it was parody, which isn’t surprising, but honestly it wouldn’t be surprising if it was true either."

More examples of the claim -- which began circulating online after Russia invaded Ukraine on February 24 -- appeared on Facebook here and on Twitter here.

Seagal does have strong links with Vladimir Putin. The 69-year-old "Under Siege" star has been granted Russian citizenship and has spent time with the Russian president.

Seagal's manager, Chris Nassif, called the social media claims "absolutely untrue... Steven Seagal has not been in Eastern Europe for the past 4 months."

Nassif added: "He wants peace for both countries."

Another representative for Seagal said the actor is in Dubai, not Ukraine, as the posts claim.

"There is zero truth" to the social media claim, and the photo is lifted from Seagal's 2017 movie Killing Salazar, the representative said. "It is unfortunate that people with large followings don't do a little more fact checking before sharing such content to millions of people around the world."

A Google reverse image search showed that the same photo of Seagal used in the alleged tweet appears on the Rotten Tomatoes page for "Killing Salazar," also known as "Cartels."

AFP Fact Check has debunked other inaccurate claims about the conflict in Ukraine here.