Facebook posts are circulating in Africa claiming to feature an image of Ukrainians kneeling and praying in the snow days before Russian troops invaded their country on February 24, 2022. In reality, the picture dates back to 2019 and shows residents of Kharkiv who had been praying every day in the city square since March 2014 when Russian separatists attacked Ukraine.

On February 20, 2022, a Nigerian Facebook page with more than 200,000 followers shared the image of people kneeling together in the snow with a caption reading: ”Ukrainian Christians pray outdoors, in the snow, for their country in this phase of war danger".

The post has since been shared more than 350 times. Dozens more like it have appeared elsewhere in Africa, including in Kenya and Ghana. 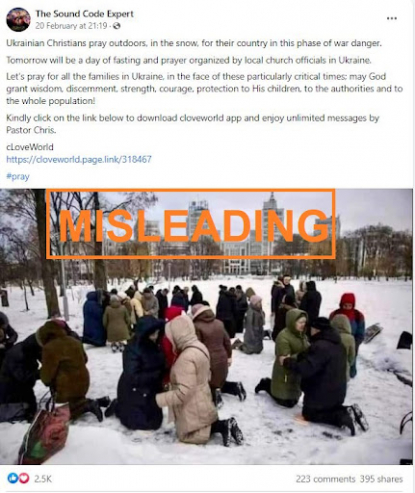 The claim has also circulated in German.

However, AFP Fact Check found the photo is unrelated to Russia's invasion of Ukraine this week.

A reverse image search led to a 2019 article published by the International Mission Board (IMB), a Baptist missionary society. The story included the photo, which is accredited to the IMB. 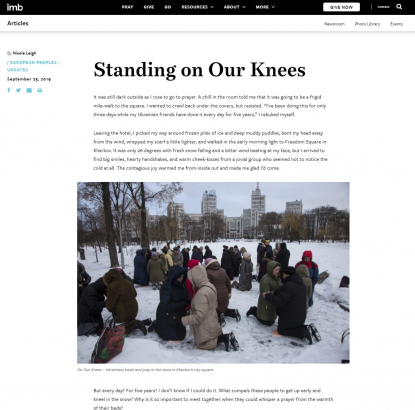 A screenshot of the article on IMB website, taken on February 25, 2022

The same content is found on its official Facebook page. Contacted by AFP Fact Check, the IMB confirmed that it owned the image.

According to the organisation, the photo shows Ukrainians in the Kharkiv city square holding daily public prayers – as they had done so for five years – after Russian separatists attacked the country in March 2014.

The move was followed by Russia's annexation of Crimea, sending tensions soaring between the two countries.

Geolocation of the area showed that the picture was indeed taken at Kharkiv city square, also known as Freedom Square. We compared the image being shared in the misleading post to a street view from Google Maps and matched the buildings in the background. 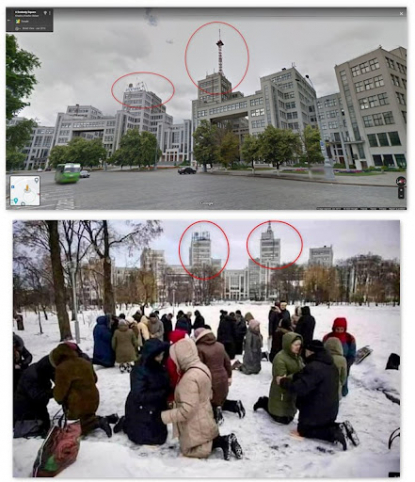 A comparison of the Google Maps view of Kharkiv city square (top), and the image shared in misleading posts, taken on February 25, 2022

While this particular picture is a few years old, CNN posted a video on February 24, 2022, of people seen praying in Kharkiv's square – without snow – as Russia began attacking Ukraine.

Russia launched a full-scale ground invasion and air assault in Ukraine on February 24, 2022, forcing civilians to shelter underground and displacing more than 100,000 people.