Two images of huge explosions among residential buildings have been shared hundreds of times on social media alongside a claim that they show Russia’s attack on Ukraine. But the claim is false: the photos show Israeli airstrikes in the Gaza Strip in 2018 and 2021.

One of the images was published on Facebook in Kenya on February 24, 2022.

“BREAKING: As Russia's Putin announces a 'military operation' in Ukraine, Ukrainian Interior Ministry confirms that its capital Kyiv is under attack from Russian cruise and ballistic missiles. War has begun (sic),” reads the post’s caption. 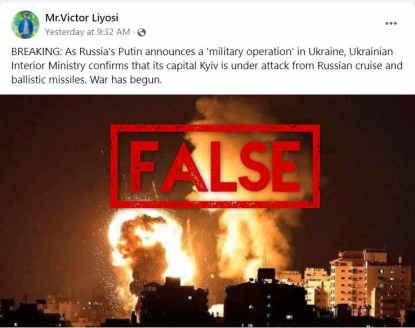 Other posts containing the same image and a second one, also showing a nighttime explosion, were published on Facebook, Instagram and Twitter in Mexico (here, here, here, here, here), and debunked by AFP Fact Check in Spanish. 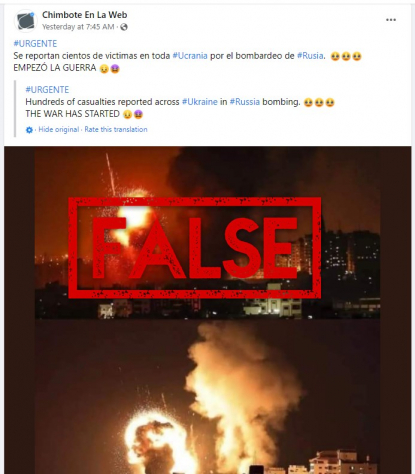 Screenshot of one of the false posts containing two images of explosions, taken on February 25, 2022

The claims about the images surfaced shortly after Russia invaded Ukraine on February 24, 2022. AFP reported that Russian President Vladimir Putin’s administration sent troops into the country and unleashed airstrikes that Ukrainian authorities said have left dozens of people dead.

However, the two images on social media are unrelated to the war in Ukraine.

A reverse image search found that one of the photos, showing two columns of smoke rising from a residential area, , was published in articles here and here. It shows airstrikes carried out by Israel on Gaza.

The image, credited to AFP photographer Mahmud Hams, was taken in 2021 when Israel responded with airstrikes to rocket attacks by Hamas . 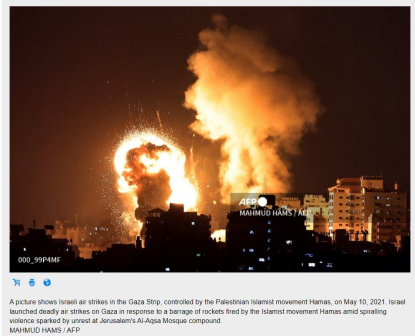 The second picture showing a fireball and a pall of black smoke also shows an Israeli airstrike in the Gaza Strip, this time in 2018. It is also credited to AFP photographer Hams. 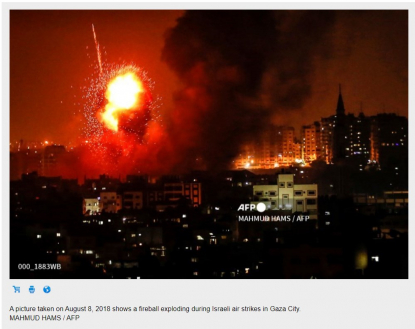 The original photo showing airstrikes in Gaza in 2018

The 2018 round of fighting in Gaza was triggered by clashes between Palestinian protesters and Israeli security personnel in Jerusalem's Old City amid rising tensions over the potential eviction of many Palestinian families.