Skip to main content
Aerial view of the confluence of the freshwater from the Baker river (R) and the glacial waters from the Neff River (L) in the region of Aysen, southern Chile, on February 12, 2022 ( AFP / Pablo Cozzaglio)

Social media posts claim new scientific findings showing glaciers have less ice than previously calculated mean warnings about a potentially devastating sea level rise are overblown. But the lead author of the study called the posts a "concerning" misinterpretation of the data, there is a scientific consensus that sea level rise is a serious issue, and glaciers melting could also threaten access to fresh water.

"Ooops. Got it wrong again. Seems that the dreaded sea level rise promised by climate alarmists isn't going to be as bad as hoped for," says a February 13, 2022 Facebook post in a group discussing climate change.

The post links to an article about a study published in the journal Nature Geoscience on February 7 titled: "Ice velocity and thickness of the world's glaciers." 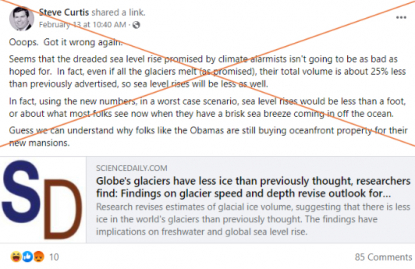 Romain Millan, geophysicist at the Institute of Environmental Geosciences in Grenoble, France, and lead author of the study, told AFP he found the characterization of the research "quite concerning."

The paper introduces a new atlas of ice velocity and volume of all glaciers on Earth outside of ice sheets, using more than 800,000 pairs of satellite images.

The new data suggests that there is 11 percent less ice volume in the glaciers than previously estimated. And because the world's glaciers are one component influencing sea level rise, the study also revised down the potential contribution of these glaciers by 20 percent, from 13 to 10 inches.

These "findings are not good news in any way," Millan said. "Our study does not change the fact that glaciers and ice sheets are melting at increasing rates, hence they will continue to contribute more and more to sea level rise."

More than one factor

The primary drivers of changes in the global mean sea level (GMSL) are scientifically recognized as thermal expansion -- the change in ocean water volume due to increased warming of the atmosphere, which in turn warms the ocean -- and the addition of water mass associated with ice-mass loss from both ice sheets and glaciers.

Data from 1993 to 2018 also shows that ocean thermal expansion, and melting from glaciers, Greenland and Antarctica have been contributing 42 percent, 21 percent, 15 percent and 8 percent to the global mean sea level, respectively. In the future, these proportions may change.

Millan said that the Greenland Ice Sheet and the Antarctic Ice Sheet were not the subject of the study, but "will be the major drivers of the sea level rise" in the long term.

As an example, he explained that if all glaciers excluding ice sheets were to melt, it would contribute to a rise in sea level of about 10 inches, while in Antarctica, there is enough ice to raise the sea level by about 187 feet.

Jayantha Obeysekera, director of the Sea Level Solutions Center at Florida International University, said polar ice sheets are a big factor, "with a lot of uncertainty around it" in terms of their future contribution to GMSL.

"So, you really need to look at the contribution of each of these factors combined to understand how those sea levels might evolve, and not jump into conclusion because of one factor," he said.

Sridhar Anandakrishnan, glaciologist and professor of geosciences at Penn State University, said: "We know that it makes a huge difference whether that melting happens over decades versus if it happens over centuries.

"Sea level rise is approximately 1.5-2 cm/decade averaged over the last 100 years or so, and about 4cm/decade in recent years," he said.

The rate of sea level rise is of most concern and this is why "climate scientists are invested in slowing the rate of warming -- it can help to slow down the melting and extend the time we have to continue to transition to a carbon free economy," Anandakrishnan added. 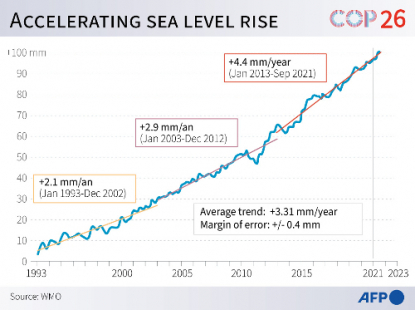 Obeysekera agreed: "Rising seas: it's a matter of when, not if."

For example, along the United States coastline, sea level is projected to rise an average of 10 to 12 inches from 2020 to 2050, which will be as much as the rise measured over between 1920 and 2020, according to a 2022 Sea Level Rise Technical Report by the National Oceanic and Atmospheric Administration.

"Failing to curb future emissions could cause an additional 1.5-5 feet of rise for a total of 3.5-7 feet by the end of this century," the report warned.

The findings of the study referenced in the social media posts also raise concerns about the glaciers freshwater availability to local populations.

Ginny Catania, professor and senior scientist at the department of Geological Sciences of the University of Texas, Austin, said it is "very concerning that we actually have less land ice to lose than we had previously thought. This means that we will likely melt entire glaciated regions more rapidly than previously estimated."

The revised estimates, Catania said, can be devastating for cities and nations that depend on glacial meltwater for drinking water, irrigation, and electricity generation.

Millan gave the tropical Andes as an example, "where millions of people are relying on the glacial freshwater (for hydropower, drinking or agriculture)."