Skip to main content
A man clears debris at a damaged residential building on Koshytsa Street, a suburb of the Ukrainian capital Kyiv, where a military shell allegedly hit, on February 25, 2022 ( AFP / Daniel Leal)

Photo does not show Japanese ambassador staying to fight in Ukraine

Social media posts claim a photo of a man in samurai regalia shows Japan's ambassador to Ukraine, saying he chose to stay and fight invading Russian forces. This is false; the image pictures Ukraine's ambassador to Japan, who tweeted it prior to the invasion.

"The Japanese ambassador to Ukraine stayed in Kiev. His great-grandfather's samurai sword and traditional armor was delivered to him from Tokyo, Japan. In a FB post, he declared that the samurai must protect the country in which he is!" a February 24, 2022 Facebook post says.

The post is a screenshot of an earlier tweet liked 40,000 times, which featured a photo of a man wearing a karuta, the traditional armor of Japan's samurai warriors, and holding a katana sword. The Ukrainian yellow trident on a blue background is visible on the wall behind him. 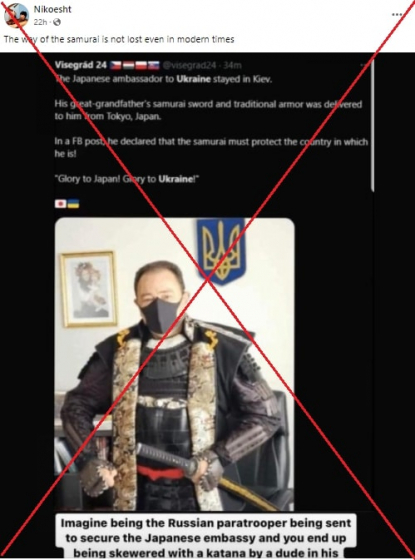 However, the photo does not show the current Japanese ambassador to Ukraine, Kuninori Matsuda.

The image was first posted on February 14 on Twitter by the Ukrainian ambassador to Japan, Sergiy Korsunsky.

We know what we are fighting for. How about Russia?
私たちは何のために戦っているのかを知っています。ロシアはどうですか？ pic.twitter.com/8FEInU3bWn

Asked by a Twitter user where his samurai helmet was, Korsunsky replied with another photo of him donning the traditional kabuto helmet, but without a Covid-19 mask, making him more recognizable.

On February 13, the Japanese embassy in Ukraine urged its nationals to evacuate, saying that most of its staff would leave the country.

The statement did not specify whether Matsuda stayed in Ukraine. Consular staff did not respond to requests for comment by the time of publication.

AFP Fact Check has debunked other inaccurate posts about the conflict in Ukraine here.