An image circulating in Hindu-majority India purports to show a hijab-clad Muslim student who was filmed in a viral video being harassed by a group of Hindu men outside her college in the southern Indian state of Karnataka following a hijab ban in local colleges. However, the claim is false; the photo has been doctored to insert the face of a different woman, who told AFP her image has been misused.

It purports to show a photo of a young woman wearing jeans and a crop top.

The Facebook post's caption reads in part as: “Karnataka Hizab girl.. But come to the college in burqa and shout Allahu akbar.”

“She should get a role in a Bollywood film, for her acting talents alone. Rs 5 Lakh already delivered by sponsors/ mullas for that epic act.”

"Hijab girl" refers to a Muslim student seen in this viral video from February 2022 shouting "Allahu Akbar" ("God is greatest") after being harassed by Hindu men in the southern Indian state of Karnataka.

The state's decision to ban hijabs from the classroom sparked protests and highlighted religious tensions in Hindu-majority India.

The student was later identified as Muskan Khan. She has given interviews to various Indian media outlets including NDTV and The Wire.

However, the claim is false. The photo has been doctored to add the face of a different woman in the image. It does not show Muskan Khan.

A reverse image search found a similar image shared on Twitter on April 30, 2020, with a different face of the girl.

Below is a comparison of the doctored image (L) and the image found in the tweet (R): 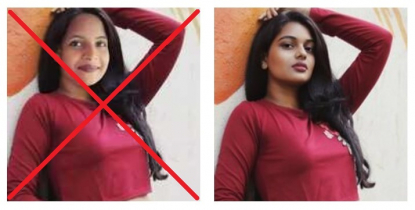 The Twitter user also shared two other images of the same woman in different outfits, with a hashtag, “#tanyajena.”

Keyword searches found this bio page on bioofy.com of a model named Tanya Jena, featuring similar photos of the woman seen in the Twitter images of her.

AFP could not find any original photos posted on social media by Jena.

AFP found the face seen in the misleading photo corresponds to a photo on the Facebook profile of Najma Nazeer, who describes herself as a social activist in Karnataka's capital Bangalore.

Below is a comparison of the viral image (L) and cropped image taken from Nazeer’s Facebook profile photo (R):

Nazeer told AFP that her image had been misused.

“They are sharing my image because they are against me, as I work for constitutional rights.”

AFP has previously debunked other posts here and here that misleadingly shared images of Nazeer as Muskan from the hijab controversy.