Skip to main content
A medical staff member takes a nasal swab from a visitor (C) to test for the Covid-19 coronavirus at a virus testing centre in Seoul on February 9, 2022. ( AFP / Jung Yeon-je)

US study misrepresented in false posts about PCR tests

Multiple social media posts circulating in South Korea claim that a 2020 research paper by academics at Johns Hopkins University in the US shows PCR swab tests for Covid-19 are actually "covert vaccinations". These posts are false; Johns Hopkins University told AFP its scientists performed laboratory experiments on devices that "have been neither tested nor used for vaccine delivery". As of February 23, no Covid-19 vaccines have been administered through swabs.

"Johns Hopkins researchers said getting PCR tests is the same as getting a vaccination," reads a Korean-language Facebook post on February 6.

"It means PCR tests are dangerous. Please refuse to get one." 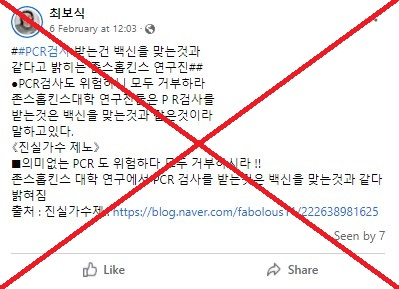 It reads: "Johns Hopkins researchers have developed tiny, star-shaped micro-devices that attach to the intestinal mucosa and can deliver drugs into the body.

"These tiny devices, known as 'Theragrippers,' are made of metal and a thin film that changes shape.

"According to Johns Hopkins University, Theragrippers are actually administered with a cotton swab."

"There is no evidence that PCR tests cause harm to your body," Dr Thiravat Hemachudha, head of the Emerging Infectious Diseases Health Science Center at Chulalongkorn University in Thailand, told AFP in November 2021.

AFP has debunked other misleading claims about PCR tests here, here and here.

AFP found the actual Johns Hopkins University study referred to in the posts was published in 2020 here.

Responding to the false posts, a spokesperson for the university told AFP the study had been "inaccurately used for disinformation purposes."

"Our article described small devices known as 'theragrippers' that are deployed to the intestines via an endoscope," the spokesperson said.

"Theragrippers have been neither tested nor used for vaccine delivery."

AFP reviewed the study and found no mention of either Covid-19 PCR tests or vaccines -- although scientists say the devices "can potentially carry any drug and release it gradually into the body."

To date, the technology had only shown promise "in a laboratory setting," the Johns Hopkins University spokesperson told AFP.

"It is still in its infancy and has not been approved for use in humans."

AFP has previously debunked claims that PCR tests -- one of the most widely used laboratory methods for detecting the Covid-19 virus -- are vaccines in disguise.

"No vaccine so far has shown that it can be given through a swab. Swabs are used to collect samples and not to administer vaccines," Dr Phionah Atuhebwe, a medical officer for the World Health Organization in Africa, told AFP.

As of February 23, approved Covid-19 vaccines are administered through intramuscular injection although research about intranasal vaccines are ongoing.