Skip to main content
A medical staff takes a swab sample of a passenger for a PCR test during a Covid-19 coronavirus screening upon his arrival at a railway platform in Mumbai on September 13, 2021 ( AFP / INDRANIL MUKHERJEE)

Facebook posts shared repeatedly in Thailand warn that Polymerase Chain Reaction (PCR) nose swab tests for Covid-19 are inaccurate and harmful to human health, including claims that they can damage nerves and the brain. But experts told AFP there is no evidence that PCR tests are dangerous. International health bodies have approved the test as the gold standard for diagnosing Covid-19.

"Why would the government support the use of TR-PCT (sic) tests to diagnose people with Covid-19 when it gives false-positive results 90% of the time," reads a lengthy Thai-language Facebook post from October 15. 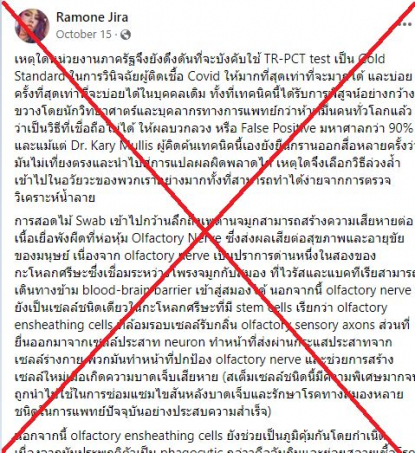 The post's reference to "TR-PCT" tests appears to be a mispelling of "RT-PCR", which stands for Reverse Transcription Polymerase Chain Reaction.

It is one of the most widely used laboratory methods for detecting the Covid-19 virus in many countries, including Thailand and New Zealand.

The post includes a link to a YouTube video which it claims shows the inventor of the PCR test, Dr Kary Mullis, stating it is not a reliable way to diagnose Covid-19.

It also alleges that inserting a nasal swab is "harmful to human health and wellbeing", claiming that it can damage nerves and the brain.

The post claims that the swabs used in PCR tests are sterilised with ethylene oxide, which it says is a carcinogenic substance.

The user credits the information to an article entitled "PCR Tests and the Depopulation Program by Kevin Galalae", which was published on October 10, 2021.

Dr Thiravat Hemachudha, the head of the Emerging Infectious Diseases Health Science Center at Chulalongkorn University, said the purported warning was a hoax.

"This post is rubbish. It aims to make people afraid to take RT-PCR tests. It is completely false," he told AFP on November 22.

The post claims that Kary Mullis -- inventor of PCR tests -- stated the test is not reliable.

In the video, Mullis was talking about how PCR test results can be misinterpreted to detect the HIV virus.

He discouraged the use of PCR to detect that particular virus, not others.

He did not say that the tests were unreliable in detecting coronavirus.

AFP has previously debunked the claim about Mullis in Spanish here.

Mullis, who denied that HIV was the cause of AIDS, was a controversial figure in the science world. He died in August 2019, months before the Covid-19 pandemic.

Dr Thiravat said the use of a nasal swab was a reliable way to detect Covid-19. "RT-PCR tests are accurate as the virus is mostly concentrated in the nasal cavity. In comparison to saliva, the virus is less prevalent there," he explained.

Dr Thira Woratanarat, an associate professor at the Department of Preventive and Social Medicine at Chulalongkorn University described the RT-PCR test as "the best method in detecting the coronavirus".

"It is the standard test to confirm if someone has contracted Covid-19. By using DNA, it is highly accurate," he told AFP on November 22, 2021.

Polymerase Chain Reaction (PCR) tests are the most commonly used method to detect the presence of SARS-Cov-2, the virus that causes Covid-19.

But as SARS-Cov-2 contains RNA -- a single strand of genetic material -- the Covid-19 PCR test takes a further step known as Reverse Transcription (RT) to convert the RNA to DNA in order to identify the virus. The test's full acronym is RT-PCR, as explained here by science magazine Cosmos.

RT-PCR tests are the “gold standard” in detecting Covid-19 , as Jim McKinney, a spokesman for the US Food and Drug Administration (FDA) mentioned in this AFP fact check.

AFP has previously debunked misleading claims about the reliability of RT-PCR tests here, here and here.

Health experts said there is no evidence RT-PCR tests are dangerous to humans.

"There is no evidence that PCR tests cause harm to your body, either to the olfactory nerve or blood-brain barrier as the post suggests," Dr Thiravat said.

Dr Thira also confirmed that the PCR test is safe to use. "There is no evidence to support that PCR tests endanger your nerves or brain -- although when you do the RT-PCR tests, it is recommended that you are gentle in order to avoid scratching or injury. Heath professionals will help you with that," he told AFP.

"You don't need to be afraid that it will damage your nerves or brain," he added.

According to Public Health England, ethylene oxide has been classified as being able to cause cancer in humans and may be harmful to an unborn child.

This AFP report explains that ethyline oxide may sometimes be used to sterilise test kit swabs. However, it also cites numerous health experts and medical institutions as saying that proper use of the chemical to sterilise swabs does not make them dangerous to health.

As part of the fact-check report, Sarah Racic, a spokeswoman from the Australian Department of Health, told AFP on July 23, 2021 that there is a "lack of evidence to suggest that residual ethylene oxide exposure from the transient use of ethylene oxide sterilised Covid-19 PCR test swabs causes cancer or DNA mutations".

She added that "the majority of swabs used for collection of Covid-19 samples are non-sterile and therefore are not exposed to ethylene oxide."

For swabs that are sterilised, the process works because the gaseous ethylene oxide does not stick to the swabs, Annette Beck-Sickinger, professor of biochemistry and bioorganic chemistry at the University of Leipzig, said for a previous fact check in German.

"All the stories that testing triggers 'cancer' are really unfounded," she said.

Dr. Kajornsak Kaewcharat, Deputy Director-General of Thailand's Department of Disease Control, told AFP on November 23, 2021: “RT-PCR tests are safe to use. There are no carcinogenic chemicals.”

Claim: 'Masks do not protect against Covid-19'

Shabir Madhi, professor of vaccinology at South Africa's University of Witwatersrand, told AFP that the prolonged wearing of masks could not cause hypercapnia -- the condition when carbon dioxide is built up in the blood which usually happens as a result of hypoventilation, or not being able to breathe properly and get oxygen into the lungs.

"There should be no issue "unless you are wearing a plastic impermeable mask," he said in an emailed response, adding however that care needs to be taken with very young children.

However, the masks should be made from a breathable material. "Surgical or fabric masks do a great job in preventing the virus from entering our body," Dr. Thiravat told AFP.

AFP has debunked a claim that prolonged use of masks will cause hypercapnia here.

Kevin Galalae, whose article the misleading post cites, describes himself on LinkedIn as "Founder and Director of the Center of Global Consciousness".

In his profile, the organisation is described as "dedicated to the eradication of all chemical, biological, psychosocial and economic methods of population control", accusing the United Nations and world governments of a depopulation campaign.

New World Order conspiracy theories -- which include the idea that state leaders are trying to depopulate the world -- have long been part of far-right misinformation campaigns.

They have gained more traction during the Covid-19 pandemic.

However, experts said the claim is "completely false and twisted beyond the truth".