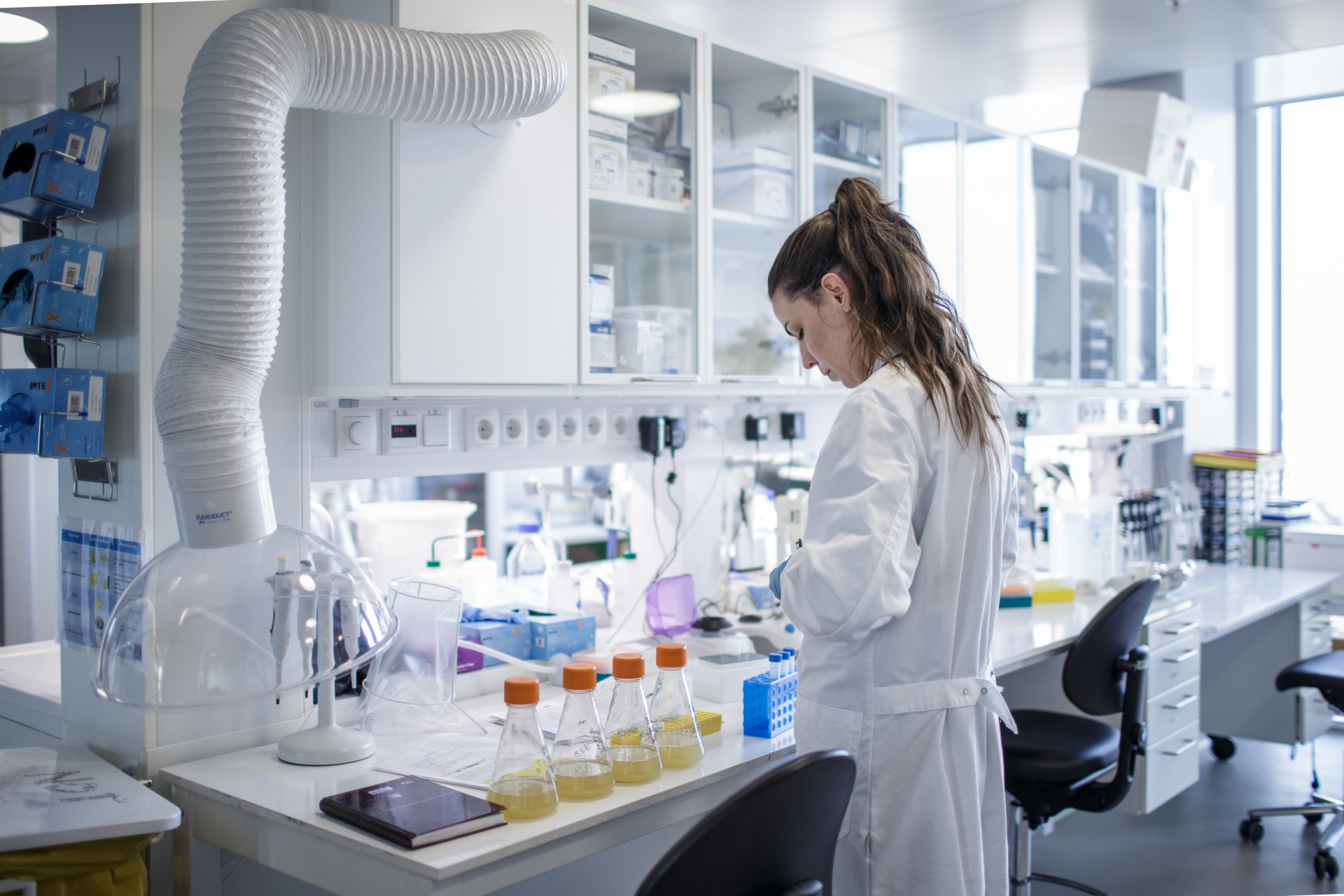 A researcher works on a vaccine against COVID-19 at a Copenhagen university research lab in Denmark, on March 23, 2020 (AFP / Thibault Savary)

A short portion of an interview given by discredited researcher Judy Mikovits, in which she claims that a vaccine for COVID-19 will be deadly, warns against immunization, and advocates for a five-year moratorium to test all vaccines, has been watched tens of thousands of times on YouTube and Facebook. The claims are false; vaccine candidates go through three phases of clinical trials, are carefully monitored for adverse effects, and multiple doctors told AFP vaccines are safe.

“Dr. Judy Mikovits explains why the Covid vaccine may kill 50 million Americans this fall,” reads the text over a thumbnail of a video shared on YouTube and on Facebook in Canada and the US. 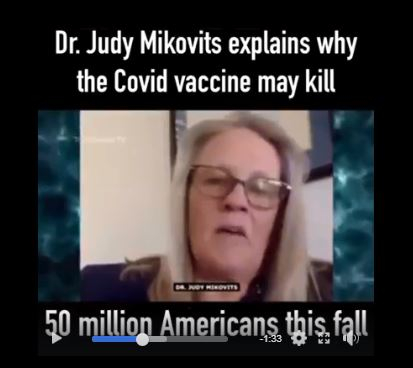 In it, Mikovits claims: “If they were successful in mandating it (a COVID-19 vaccine) for everyone, at least 50 million Americans would die, probably from the first dose.”

The full interview from May 8, 2020 with Christina Aguayo of America’s Voice, an online network, was removed from YouTube for violating the platform’s community guidelines, but AFP Fact Check found this short clip which remains easy to download and reshare.

Mikovits gained widespread attention in 2009 with a seemingly breakthrough study on chronic fatigue syndrome. The paper was later retracted when the findings could not be replicated.

She was also briefly jailed on charges of theft from the laboratory that performed the ill-fated study.

Mikovits’s false claims about the novel coronavirus first went viral in May 2020 with the release of a video called “Plandemic.” Social media platforms struggled to fully remove the 26-minute film, after it was found to contain harmful misinformation. AFP fact-checked “Plandemic” here.

This subsequent interview made three separate false claims which are investigated here.

Gretchen Snoeyenbos Newman, assistant professor of infectious disease at Wayne State University, called this claim “a wild assertion without basis and without any data to support it.”

“Researchers who specialize in studying and developing vaccines, their first consideration is always safety,” she said.

AFP has reported that there are more than 100 vaccine candidates for COVID-19, including from researchers in Canada and the US.

The possible vaccines are first tested in labs and then on animals. Successful candidates can then move on to three phases of clinical trials.

Emily Smith, an epidemiologist who is an expert in designing clinical trials, said: “The first phases of vaccine development are focused entirely on safety and people are not taking shortcuts here.”

The US Centers for Disease Control and Prevention (CDC) website explains: “During Phase I, small groups of people receive the trial vaccine. In Phase II, the clinical study is expanded and vaccine is given to people who have characteristics (such as age and physical health) similar to those for whom the new vaccine is intended. In Phase III, the vaccine is given to thousands of people and tested for efficacy and safety.”

Smith, an assistant professor of public health at George Washington University, said: “We insist on safety and this is a process that we always use.”

Although scientists are racing to provide a safe and effective vaccine to put an end to the novel coronavirus pandemic, Smith said the process is not being sped up in the clinical trials.

“The part where we’re catching up on time is largely related to the manufacture of vaccines,” she explained.

“Even with an ‘accelerated’ timeline, rigorous testing for safety and efficacy is still being conducted,” she told AFP by email.

Claim: “Nobody should get a vaccine of any kind if they want to be healthy.” FALSE

Snoeyenbos Newman called vaccines “the safest public health intervention that we do,” adding that they had “radically changed our relationship with infectious disease.”

The World Health Organization estimates that the measles vaccine alone has saved 17.1 million lives since the year 2000.

Snoeyenbos Newman, noting her parents’ generation was the first to be protected from annual poliovirus outbreaks, said: “Before we had vaccines, epidemic and pandemic disease was a regular part of our lives.”

She credited successful vaccination campaigns for Americans living without the fear seasonal infectious disease, but noted this has changed with the COVID-19 pandemic.

“Coronavirus is really for us a demonstration of what a vaccine-free world looks like.”

Claim: A five-year moratorium on all vaccines is necessary for safety testing. FALSE

Both Kent State’s Smith and Wayne State’s Snoeyenbos Newman said this is false.

Smith explained: “All vaccines that are currently in use have an extensive history of testing for safety, some dating back many decades (such as measles and polio which were developed in the middle of the 20th century).

“Vaccines are one of the safest pharmaceutical products out there.”

“The idea of a blanket moratorium on vaccine development is not only without basis in any sort of scientific consensus, or political consensus, but also incredibly dangerous to the millions of people around the world who are infected by infectious diseases for which we are currently developing vaccines,” she said.

Health Canada's Biologic and Radiopharmaceutical Drugs Directorate reviews the safety and efficacy of all vaccines before they are released to the public. To obtain authorization companies must prove, “the benefits of the vaccine outweigh any identified risks.”

In the US, this process is overseen by the Food and Drug Administration.

After the vaccines are approved for wide use, they are carefully monitored.

Canada and the US require reporting of all adverse events following immunization. The most recent report from Canada is available here. Data from the US can be downloaded here.

George Washington University’s Smith said: “Even a single side effect, when it comes to vaccines, are carefully monitored.”

This CDC graphic explains the process for maintaining vaccine safety in the US, assuring patients that vaccine recommendations may change if safety monitoring reveals new information on vaccine risks. 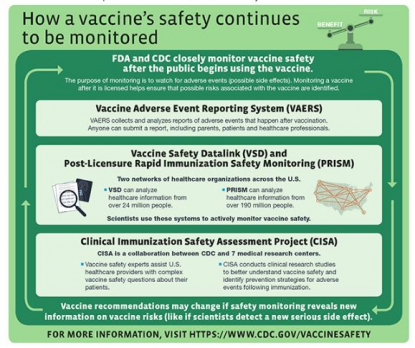 Vaccines are a regular source of misinformation. AFP Fact Check has investigated misleading posts about the use of potassium chloride in vaccines, the ingredients of the flu shot, as well as numerous claims about high profile advocates of vaccination, such as Microsoft co-founder Bill Gates, here, here and here.