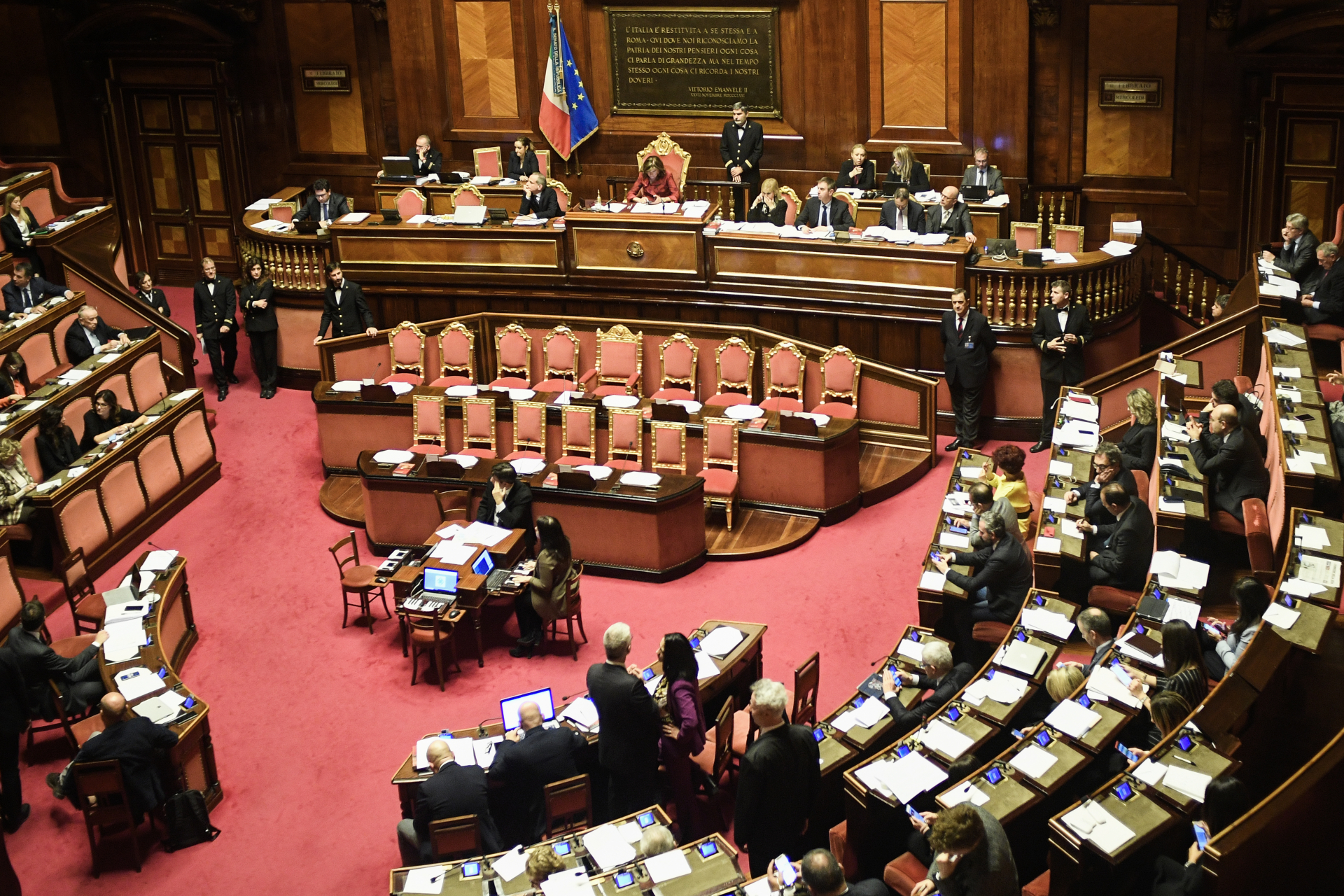 A video of Italian politician Sara Cunial blasting Bill Gates as a “vaccine criminal” in speeches to parliament has been viewed tens of thousands of times on Facebook and YouTube. But her statements are riddled with misinformation. AFP Fact Check debunks some of the claims.

Independent MP Sara Cunial called on Italy’s prime minister to hand billionaire philanthropist Bill Gates over to the International Criminal Court for committing “crimes against humanity”, in parliamentary speeches she gave on April 24 and May 14, 2020.

The MP, who is known for her strong stance against vaccines, was expelled from the anti-establishment Five Star Movement last year after accusing the party of being in the pockets of “farming mafias” over its handling of a deadly olive tree disease. 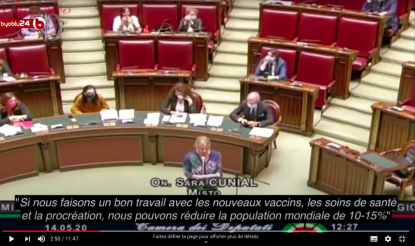 YouTube screenshot taken on May 19, 2020, showing Sara Cunial at the Italian Parliament

On May 15, a video combining both her speeches surfaced on social media in various countries, including in France, Germany, Pakistan and the US. Extracts from the speeches have also circulated in Facebook posts around Africa, like here, here and here. 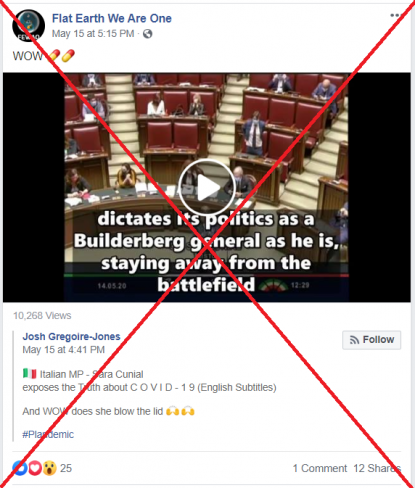 A screenshot taken on May 27, 2020, showing the misleading post

According to another Facebook post, which links to a news report by Russian state TV channel RT, the Italian lawmaker was “exercising her parliamentary privilege to blast Gates as a ‘vaccine criminal’ and globalist tool”.

RT’s report, headlined: “Italian lawmaker demands Bill Gates be investigated for ‘crimes against humanity’... But WHY?”, features a YouTube video of the speech, which garnered more than a million views before it was removed.

Microsoft founder Bill Gates regularly comes under attack from conspiracy theorists who have accused him of plotting to reduce the global population through deadly vaccines or even of creating the new coronavirus. The tech giant has pledged more than $300 million to efforts to fight to pandemic.

Gates wants to reduce the world population by 10 - 15%? FALSE

Two minutes into the address, Cunial claims that Gates is planning to reduce the world population. She refers to a speech the billionaire gave in 2018 where he purportedly predicted a pandemic, which was later simulated last October in an exercise called “Event 201” organised by the John Hopkins Center for Health Security, the Bill and Melinda Gates Foundation and the World Economic Forum.

The lawmaker says in Italian: “For decades, Gates has been working on depopulation policy and dictatorial control plans on global politics, aiming to obtain the primacy on agriculture, technology and energy.”

“Gates said, I quote exactly from his speech: ‘If we do a good job on vaccines, health and reproduction, we can reduce the world population by 10-15 percent’. And again: ‘Only a genocide can save the world’”.

The Johns Hopkins Center for Health Security dismissed claims that it predicted the COVID-19 outbreak, and the first part of the quote Cunial cites was shared in a misleading context. She actually pulled the quote from a 2010 speech delivered by Bill Gates in an event unrelated to the COVID-19 pandemic.

AFP Fact Check ran a Google search for keywords from the quote attributed to Gates and traced it to a speech he gave in February 2010 on reducing carbon emissions.

“The world today has 6.8 billion people, that’s headed up to about 9 billion. Now if we do a really great job on new vaccines, health care, reproductive health services, we lower that by perhaps 10 or 15 percent,” he said. Gates was talking about cutting global population growth by “10 or 15 percent” in order to reduce carbon emissions, rather than reducing the actual population.

The video does not show him saying “only a genocide can save the world”. AFP Fact Check has found no public record of him ever making this statement.

How do we reduce population growth? By reducing infant mortality. I was surprised too. http://t.co/YnebvxN3

Gates recommended developing vaccines to reduce child mortality rates, thereby increasing the chance of a child surviving to adulthood and encouraging parents to have smaller families that would benefit from government resources, saying “a virtuous cycle begins that takes a country out of poverty.”

In her speech, Cunial also accused Gates of using vaccines to  “sterilise millions of women in Africa”.

This is an old rumour debunked several times by international fact-checking organisations, including Africa Check and Snopes.

The rumour first emerged in Kenya in 2014, when Catholic bishops said that a tetanus immunisation programme aimed at women of childbearing age was an attempt to control births, and four years after Bill and Melinda Gates pledged a $10 billion funding to WHO for a decade-long vaccine push.

The Catholic bishops claimed that laboratory assessments conducted on some Tetanus Toxoid vaccine samples submitted for analysis were found to contain pregnancy hormone Human Chorionic Gonadotropin (HCG) which “develops antibodies against tetanus and HCG so that if a woman’s egg becomes fertilised, her own natural HCG will be destroyed rendering her permanently infertile.”

But the World Health Organization has dismissed the presence of HCG in the vaccine and confirmed that it is safe. “The vaccine has been used in 52 countries, to immunize 130 million women to protect them and their newborn babies from tetanus,” WHO said in November 2014. “There is no HCG hormone in tetanus toxoid vaccines.”

Furthermore, the head of one of the laboratories that carried out the analysis told Kenya's Daily Nation newspaper that the test results had been misinterpreted, and that the tetanus vaccine did not contain the pregnancy hormone.

Kenyan health authorities have also refuted the allegations which it describes as “a baseless pronouncement not backed by any scientific evidence, ill intended to cause fear and despondency among Kenyans in the uptake of much needed essential health services”.

The claim appears to originate from an Instagram post on April 7, 2020 by Robert F. Kennedy Jr., the nephew of former US president John F. Kennedy and a leader of the World Mercury Project, which advocates against mandatory vaccination.

“Indian doctors blame the Gates campaign for a devastating vaccine-strain polio epidemic that paralyzed 496,000 children between 2000 and 2017,” the post reads.

However, the claim is misleading, and has previously been debunked by AFP Fact Check. Official statistics show only a tiny number of cases in which the oral polio vaccine directly resulted in Indian children contracting the disease.