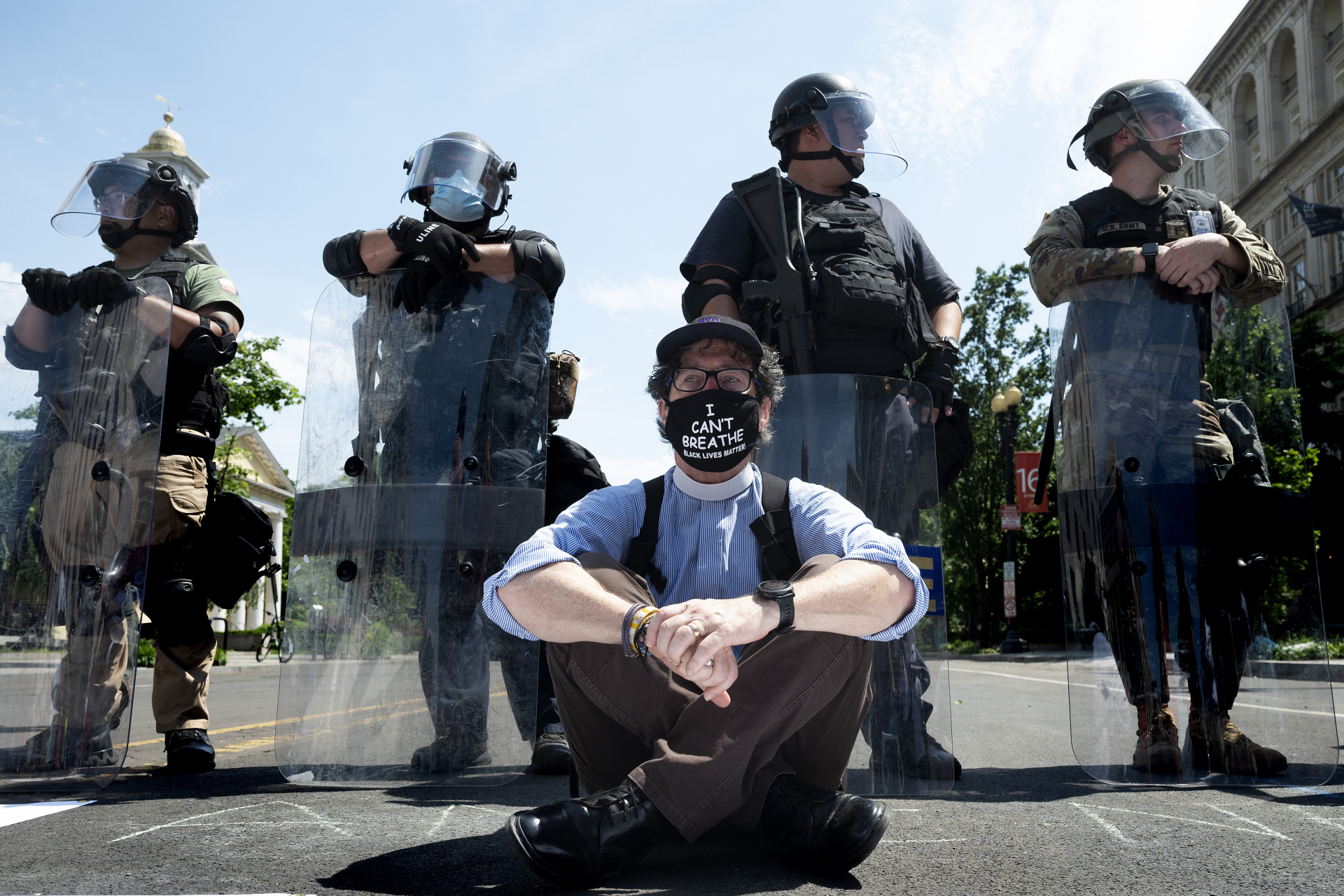 An Episcopal priest sits in front of security forces near St John’s Episcopal Church in Washington on June 3, 2020 during protests against racism and police brutality (AFP / Jim Watson)

Social media posts shared thousands of times compare US protesters’ calls to defund the police with actions taken by Hermann Goering and the Nazis in Germany. This is false; Hitler’s National Socialists did not eliminate police, and a historian said the link between murderous Nazism and today’s largely-peaceful demonstrators is misplaced.

“In 1933 Hitler appointed Hermann Goring Minister of the Interior. His first orders were to defund and eliminate the police departments so that they would not interfere with his Brown Shirts,” says the post shared 19,000 times on Facebook. It has also been shared in slightly different form, here  and here, as well as on Twitter including here, and Instagram here.

The post claims the Brown Shirts’ mission was to “riot, burn, beat up and kill citizens in an effort to sway the elections to ensure their National Socialst agenda.”

“Now today’s American socialist leaders want to defund and eliminate the police?” it says, asking if history is repeating itself. 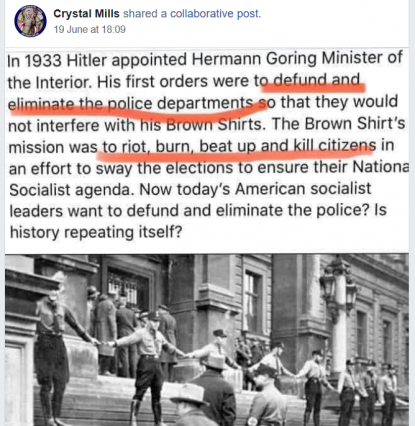 As the Nazis began establishing their dictatorship in early 1933, Goering was the interior minister of Prussia, the largest state. He was not head of the paramilitary Brown Shirts, which were also known as Sturmabteilung (SA) or Storm Troopers, and were led by Ernst Roehm.

The SA became so powerful that their ambitions threatened the Nazi regime itself. Goering and top Nazis then conspired against Roehm, executing him and other SA leaders on the Night of the Long Knives that began on June 30, 1934, according to the Holocaust Encyclopedia from the United States Holocaust Memorial Museum.

It is true, as the post says, that the Brown Shirts used violence to sway elections, “but BEFORE the Nazis took over” and dominated the government, said Itai Sneh, associate professor of history with John Jay College of Criminal Justice at the City University of New York.

The Nazis also “coaxed and exploited” the police rather than choosing to “eliminate” them, Sneh told AFP by email.

Many police had initially been skeptical of the Nazi party and its intentions, but the Nazis took measures that appealed to them, the Holocaust Encyclopedia added.

“The Nazis centralized and fully funded the police to better combat criminal gangs and promote state security,” it said.

The Facebook post implies an equivalency between the Nazi agenda and that of American protesters, who President Donald Trump has called "terrorists" and "socialists", as part of efforts to bait his Democratic rivals.

That comparison is made more explicit in comments such as those attached to posts here and here.

“ARE WE REALLY GOING TO ALLOW THIS NAZI-MINDED BUNCH OF THUGS & THE DEMONRATIC PARTY TO DESTROY OUR COUNTRY” one Facebook user asked, alluding to statues and monuments torn down or defaced, and other violence associated with some protests.

The May 25, 2020 death of an unarmed black man, George Floyd, after a white Minneapolis police officer pressed his knee on Floyd’s neck for almost nine minutes, has prompted one month of mostly peaceful protests across the US against racism and police abuse.

After numerous police killings of African Americans, Floyd’s death led to increasingly broad support for the Black Lives Matter movement as part of a national reckoning over the country’s history of racism and slavery.

Some left-leaning activists want to “defund the police,” which refers to moving funds away from police towards other areas such as social services.

Sneh called it “laughable” to suggest, as the post does, that Nazism is comparable to American “socialism,” and added that likening today’s protesters to Nazis is misplaced for two reasons.

“The Nazis' agenda was racist and murderous whereas the BLM agenda is to secure justice through politics and legal process; the Nazis were mainly violent, while most protesters are peaceful,” said Sneh, who has written on genocide.