Facebook and Instagram posts have shared a purported quote from British naturalist David Attenborough in which he appears to criticise Israel's role in the conflict with Palestinian armed groups. The posts circulated online in May 2021 as the fighting in Gaza escalated. But the posts are misleading: the BBC said Attenborough never made the purported statement. There are no credible reports that Attenborough made the purported remarks, which likely originated from an Iranian outlet's article that has since been deleted.

The purported quote was shared on Instagram on May 20, 2021. 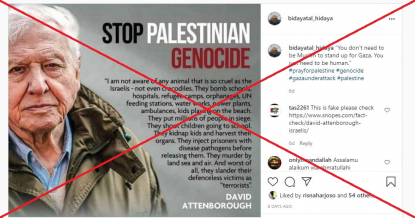 “Stop Palestinian genocide,” the title reads, alongside a photo of Attenborough.

“I am not aware of any animal that is so cruel as the Israelis - not even crocodiles. They bomb schools, hospitals, refugee camps, orphanages, UN feeding stations, water works, power plants, ambulances, kids playing on the beach”.

The same quote was attributed to Attenborough in Facebook posts here, here, and here.

AFP found no credible reports that Attenborough made the purported comments.

In response to the posts, a BBC spokesperson said the quote had been falsely attributed to the British naturalist.

"This quote is not from Sir David, and as such should not be attributed to him,” the spokesperson told AFP.

US fact check site Snopes reported that the fabricated quote was taken from a 2014 article by Iranian outlet Press TV.

The article, which has since been deleted, included the purported quote in a comment made by a user called David Attenborough. An archived version of the article can be seen here.

Similar posts sharing the fabricated quote have circulated online since at least 2014.

The quote was erroneously reported by Riyadh-based English-language newspaper Arab News and Bangladeshi news outlet The Daily Star in 2014.

The Daily Star misleadingly reported that Attenborough made the comments on July 21, 2014 -- the same day the purported comments were published in the since-deleted Press TV article.

Fabricated quotes have previously been attributed to Attenborough, including one that AFP debunked here.