The US updated its travel advisory for Sri Lanka due to its Covid-19 surge, not for alleged terrorist threat

After the US issued a new travel advisory for Sri Lanka on May 24, 2021, multiple Facebook and YouTube posts claimed the new US warning had flagged a “potential terror attack over the next few days”. The claim is misleading: the updated advisory was actually issued in response to a surge of Covid-19 infections in Sri Lanka. There is no change in the terrorist threat level in Sri Lanka as of May 25, 2021, according to the US Embassy in Colombo.

This YouTube clip published on May 24, 2021 featured an announcement made by a Sri Lankan Buddhist monk residing in the US.

The monk warns Sri Lankans of an impending terror attack, citing a US State Department Travel Advisory on Sri Lanka issued on May 24, 2021. The misleading video has been viewed more than 25,000 times.

The video caption reads: “Here is a special breaking news. Everyone be careful”

In the footage, the monk says in Sinhala: “Dear Sri Lankans, I am speaking to you from Los Angeles city in America. Today is May 24 of 2021. It's evening here. Today, the US government issued a notice to the American citizens with regard to visiting Sri Lanka. In the notice, the high prevalence of Covid-19 was mentioned and the citizens were advised to reconsider travel to Sri Lanka. Particularly, it also warned of a potential terror attack in Sri Lanka over the next few days. Sri Lanka experienced terrorist attacks earlier and the Wesak festival is coming up. So I hope and think the government of Sri Lanka and the security forces are aware of this notice.” 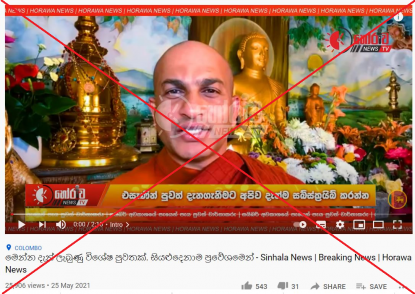 The statement made by the monk on the updated “terror attack warning” for Sri Lanka by the US government was immediately picked up by multiple Facebook users and pages, for example the post below: 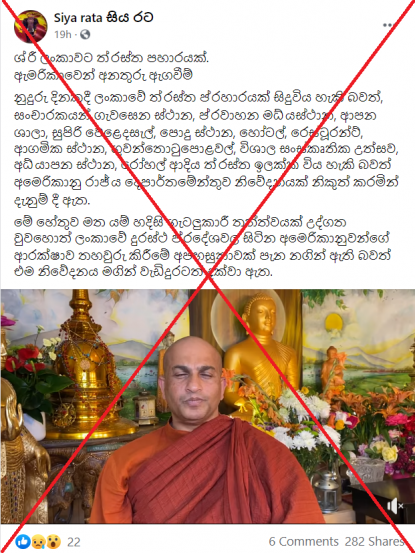 The post's lengthy Sinhala-language caption says in part:  “A terrorist attack on Sri Lanka. America warns. The US Department of State has issued a notice warning of another possible terror attack in Sri Lanka in the near future targeting public places...”

Similar claims were being shared on Facebook, for example here and on a Sinhala language news website here.

The travel advisory issued on May 24, 2021, which raised Sri Lanka’s previously imposed advisory from ‘Level Three’ to ‘Level Four’, was due to the surge of Covid-19 infections in Sri Lanka, according to the official website of the US Department of State.

While the advisory said “terrorists may attack with little or no warning”, there is no mention of “a potential terror attack over the next few days”. 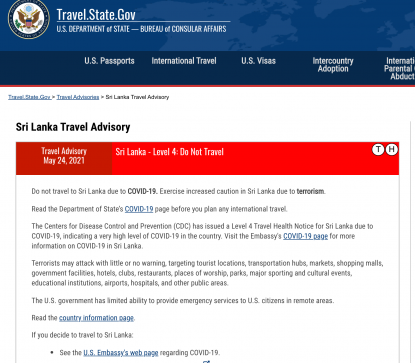 Screenshot of the U.S. State Department Travel Advisory captured on May 27, 2021

As of May 25, 2021, there is no change to the terrorist threat level in Sri Lanka, according to a clarification made by the US Embassy in Colombo in this tweet, which also stated the updated travel advisory was “solely due to prevailing COVID-19 situation in the country”.

.@StateDept has updated the Travel Advisory for #SriLanka from Level 3 (reconsider travel) to Level 4 (do not travel) solely due to prevailing COVID-19 situation in the country. There is no change to the terrorist threat level.

The State Department issued a travel advisory for Sri Lanka based on terrorist threats following the April 2019 Easter Sunday attacks in Sri Lanka, according to AFP reports.

Meanwhile, the Defense Ministry of Sri Lanka said on May 26, 2021 that Sri Lanka was not under threat of a terrorist attack, as reported here by Indian English-language newspaper The Economic Times.