Skip to main content
Policemen stand along a street as the government imposed travel restrictions and a lockdown to curb the spread of Covid-19 coronavirus in Colombo. (AFP / Ishara S. Kodikara)

An image of a former Sri Lankan parliamentarian in hospital was shared repeatedly in May 2021 in Facebook posts that claim the ex-MP was being treated for Covid-19. But the photo has been shared in a misleading context: the image has actually circulated online since 2020. The former MP told AFP the image shows him receiving hospital treatment last year for an illness that was unrelated to Covid-19.

The photo of former opposition MP Sunil Handunneththi was shared on Facebook here on May 19, 2021, as Sri Lanka battled a new wave of Covid-19 infections.

The Sinhala-language text superimposed on the image translates to English as: “I herewith inform our male and female party comrades that I have admitted myself to the IDH hospital as I’ve tested positive for Covid-19. Please everyone take care.” 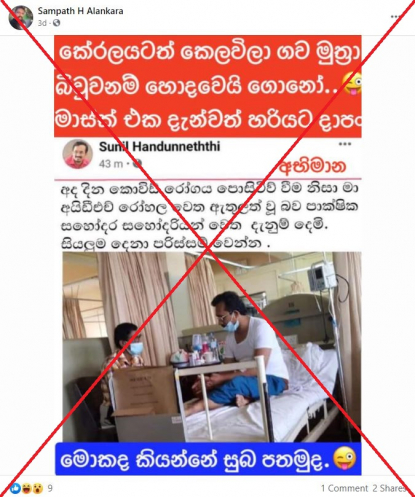 The post references the false belief among some Hindu groups in India that cow urine is a cure for the coronavirus. AFP has reported on the false claim here.

The image was shared here and here  on Facebook alongside a similar claim.

The claim is misleading: the image has actually circulated online since 2020.

Handunneththi shared the image here on his official Facebook page on September 21, 2020 in response to speculation that he was being treated for Covid-19.

The Sinhala-language caption reads: “This photograph circulating online was captured sometime earlier when I was admitted to a state hospital to receive treatment for an illness. Presently, I am in good health and am back engaged in political activities. I thank all those who inquired me about my health.”

Handunnetti told AFP the image was captured at Sri Jayawardenapura General Hospital, not the Infectious Diseases Hospital as claimed in the misleading posts.

“This image was captured last year at the Jayawardenapura hospital. Even at that point, it was used to circulate false claims about my contracting Covid-19 when that was not the case,” he said on May 21, 2021.

He shared this post on Facebook on May 20, 2021, in which he dismissed the claim that the image shows him hospitalised after contracting Covid-19.

The Sinhala-language caption translates to English in part as: “There is false news circulating on social media claiming I have been infected with Covid-19 and am receiving treatment at the IDH. I condemn this attempt by the government and groups affiliated with the government to create false rumours such as these, at a time when we should all work together.”

Handunnetti was also seen participating in a current affairs talk show on Sri Lankan television on May 20, 2021.