This is a computer-generated image of the Statue of Liberty, not a real one made from rubble in Syria

A Facebook post purporting to show a replica of the Statue of Liberty created from the remains of a Syrian artist's home has been shared more than a hundred times. The claim is misleading; the artwork is entirely computer-generated and the artist who created it has previously criticised misleading interpretations of the image.

The Facebook post was published on May 22, 2021, by a user in the United Kingdom and includes an image of what appears to be a sculpture made from blocks of concrete resembling the famous Statue of Liberty in the United States.

“A Syrian artist in Aleppo built this replica of the Statue of Liberty from the remains of his home, adding the motto ‘This is the freedom they have brought us (the USA)’,” the post’s caption reads. 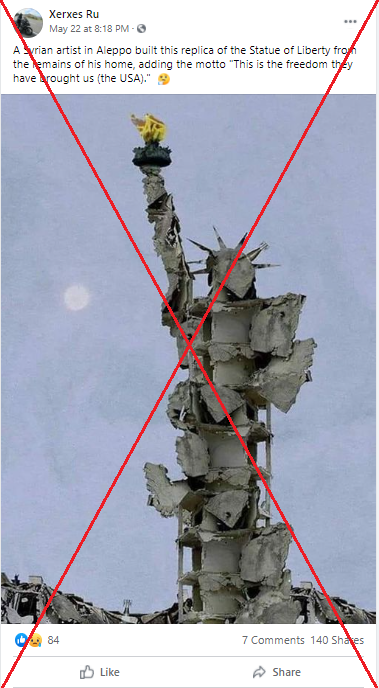 The post was shared by users in South Africa, and the same claim was shared on Facebook in other countries, including Pakistan (here and here).

As reported by AFP, almost 400,000 people have been killed in 10 years of civil war in Syria, according to the Syrian Observatory for Human Rights, a UK-based war monitor that has continued to keep count after international organisations gave up.

AFP Fact Check performed a reverse image search and found articles and debunks such as this one by Dubai’s Al Arabiya News explaining the story behind the piece, which is, in fact, a digital artwork, not a real statue.

AFP Fact Check contacted the artist Tammam Azzamin, who said the image was created from a “photomontage” on a computer in 2012 at the start of Syria’s uprising and is not a physical statue.

“It was part of my photomontage series I did in Dubai 2012, and it’s clearly photographed, repeated parts and scanned paper,” Azzam said.

As for the interpretation of the “statue” falsely attributed to Azzam in the claim, he said it was used “only as the symbol of freedom” and had nothing to do with US politics.

“They are using the picture in a context that I had not intended,” said Azzam. “It was meant to mention the importance of liberty, for the Syrian people who lost their lives and homes for freedom, and a country seeking for it, and still,” said Azzam.

Azzam said he only posted the image on Facebook and nowhere else, but the picture has been misrepresented many times in the last decade – and he has tried to correct the misinformation but with little success.

“I tried many times to send direct messages to the accounts who used my image with totally new captions and directions, but they didn’t even answer my message, or at least edit the information.”

According to Azzam’s website, after being forced to leave Syria in 2011, he started looking for new ways to create art and express the loss of his home country.

“Tammam used his understanding of graphic design to create the digital art pieces that would gain him worldwide recognition,” reads his biography.

It adds that he “used images of the destruction in his homeland to create viral images juxtaposing the violence of the Syrian war with masterpieces from the classical European canon”.

Other photomontage artworks by Azzam can be found on his website.