A video has been shared hundreds of times on Facebook in Kenya alongside a claim that it shows Cyclone Jobo in Tanzania in April 2021. The claim is false: the footage actually shows Cyclone Kenneth hitting Mozambique in southern Africa in April 2019.

The video was published here on Facebook on April 25, 2021, and has been shared more than 320 times. The caption embedded in the video reads: “Heavy Cyclone winds hit Mtwara southern Tanzania”. 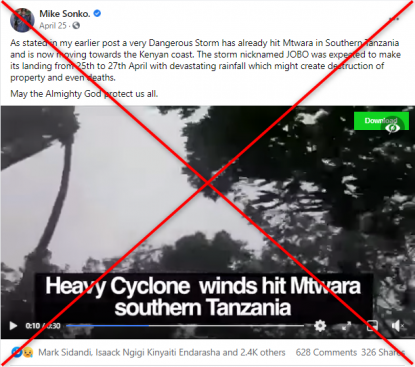 The post was shared on the Facebook account of  former Nairobi county governor Mike Sonko. His caption reads: “A very dangerous storm has already hit Mtwara in southern Tanzania and is now moving towards the Kenyan coast.”

Sonko, who has more than 2.4 million followers on Facebook, was impeached from office in December 2020 on charges related to abuse of office, gross violation of the Kenyan constitution, crimes under Kenya’s national law and gross misconduct. He is now facing criminal charges.

In April 2021, local media in Tanzania and the Tanzania Meteorological Authority (TMA) reported that the country should brace itself for Cyclone Jobo.

On April 25, 2021, the TMA tweeted a press statement written in Swahili reporting that a weakened Jobo had hit parts of the country.

“Tropical cyclone Jobo was expected to hit parts of the Tanzania coast today on April 25, 2021. This morning, a mild Jobo did hit the country in the coastal region of Dar es Salaam but it was weak since it lost its strength after encountering strong winds in the area,” said the statement by the TMA.

But the claim that the video shared by Sonko shows Cyclone Jobo in Tanzania in April 2021 is false.

The same video also appeared here in a news bulletin by CityNews Toronto, a Canadian media organisation, on April 27, 2019. The news report was headlined: “Cyclone Kenneth leaves trail of destruction in Mozambique.”

The United Nations Office for the Coordination of Humanitarian Affairs (OCHA) reported that Cyclone Kenneth was the strongest storm on record to hit Mozambique. The cyclone caused three deaths and displaced thousands of people.