Skip to main content
Residents drop off their ballots near the Multnomah County Elections building in Portland, Oregon on November 3, 2020 (AFP / Ankur Dholakia)

Articles and social media posts claim US Census Bureau figures show that nearly four million fewer voters cast ballots in the 2020 presidential election than the official tally, raising questions about the integrity of the result. But the number cited is an incomplete, self-reported measure of how many people voted, the Census Bureau described the claims as inaccurate, and a political scientist called the fraud suggestion absurd.

“More unexplainable numbers from 2020 election,” the broadcaster David J Harris Jr tweeted on May 12, 2021, linking to an article on his website headlined: “THIS IS BIG: US Census Bureau confirms HUGE CONFLICT in total number of voters in 2020 election.” 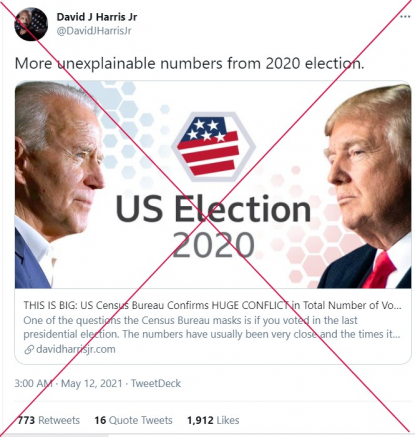 “According to the Census, the recorded number of people voting in 2020 was tallied at 154,628,000. On the other hand, official results place the number of actual ballots cast slightly north of 158 million. That’s a discrepancy of nearly four million votes,” it says.

The article goes on to cite a lawyer who is convinced that “the Census data is powerful circumstantial evidence that fraud was afoot in 2020.”

More than half of Republican supporters believe that Donald Trump lost the election to Democrat Joe Biden because of malfeasance, while Trump continues to falsely allege election fraud. AFP Fact Check has repeatedly debunked such claims.

Similar claims based on The Election Wizard’s article have been spread by The Gateway Pundit website, which earlier published other false information about the 2020 election whose results, it said, are “not supported by evidence.”

It is true that the Census Bureau, which gathers voter data every election, said 154,628,000 Americans reported having cast ballots in November 2020. This compares with 158,383,403 total votes according to state elections office figures tallied in the official Federal Election Commission 2020 presidential general election results.

But it is false to describe the census number as a definitive figure.

The data table released by the Census Bureau includes a column “no response to voting.” A footnote says the figure of 36,404,000 in this column includes those who were not asked the question about whether they voted, refused to answer it, or said they did not know.

This shows that the 154,628,000 figure cannot be seen as a complete measure of how many voted since some, for example, could have cast ballots but refused to confirm doing so in the census survey.

Screenshot taken May 13, 2021 from the US Census Bureau’s table, Reported Voting and Registration, by Sex and Single Years of Age: November 2020

John Bullock, an associate professor of political science at Northwestern University, said it is possible that people “were especially unwilling to talk about it to the census this year” when partisan feeling was high, and after public disputes over the census itself.

Bullock added that even assuming the census data is anomalous -- not tracking the official vote counts reported by states as closely as in the past -- the most obvious reason has nothing to do with fraud.

“It has to do with the double blow that the census suffered in 2020. First, it suffered from serious funding cuts over the last decade, and second, it was conducted during the height of the pandemic,” he told AFP. “So if there were under-counts, I wouldn’t be surprised.”

He also called this perhaps “the most absurd claim of fraud that I've yet heard about the 2020 election.” That is because it suggests fraud on an “insane” scale of nearly four million votes across multiple states, which would have been impossible to keep secret.

“This is so ridiculous that even most conspiracy theorists would not believe it,” Bullock said.

“There is nothing extraordinary about self-reports of voting lagging actual voter files from the 2020 presidential election,” said Al Tillery, another Northwestern associate professor of political science.

All articles
US POLITICS US Elections 2020