Multiple posts on Facebook claim Israeli Prime Minister Benjamin Netanyahu said in a recent speech that his country owed Islamist movement Hamas a huge debt of gratitude for uniting the Jews. He also allegedly vowed to stop firing at the Gaza strip “forever” if Hamas ceased its rocket attacks. The claims surfaced as the region is rocked by fresh violence. But in reality, the purported speech is a reproduction of a blog post written in 2014 as the “musings” of an Israeli blogger who wanted to create a “viral hoax”.

A  Nigerian Facebook page with more than 45,700 followers shared the post as “breaking news” on May 13, 2021, claiming that  “Netanyahu just made the following speech to Address Palestinians after bombarding Gaza with multiple rocket (sic)”.

“To Ismail Haniya, and the leaders and operatives of Hamas: We, the people of Israel, owe you a huge debt of gratitude,” begins the purported speech. “You have succeeded where we have failed. Because never before, in the history of the modern State of Israel, has the Jewish people been so united, like one person with one heart. Everyone in Israel, from Left to Right, secular and religious, in united in the knowledge that there is no accommodating an enemy that is sworn to the genocide of our people (sic).” 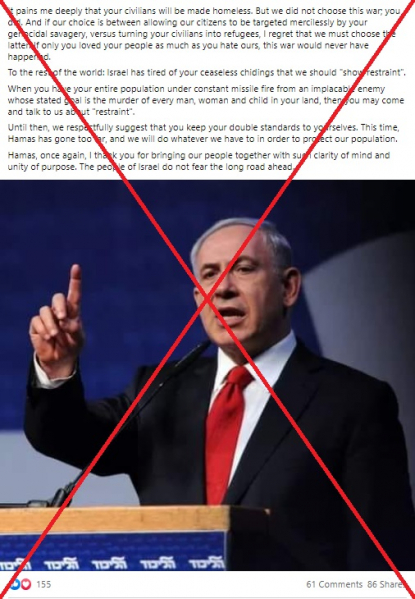 Netanyahu purportedly gave Hamas a 24-hour ultimatum to stop launching missiles in exchange for a cessation of Israeli military action.

Speech is a hoax

But the supposed speech is purely fictional and there is no official record of Netanyahu ever delivering the remarks.

AFP Fact Check traced the earliest version to a blog called “Free Thought”. The entry, published on July 8, 2014, features the entire text seen in the false Facebook posts and ends with the phrase “... and then I awoke, and it was all a dream”.

In the “about” section, the blog author, only identified as “Shaul B.”, acknowledges that all the entries are their own “musings”.

Days after the false speech was published in 2014, it was shared as genuine news in Facebook posts like this one and was published by leading online South African media house, News24.

Further research of the blog showed a post published on July 14, 2014, in which the author revealed that it’s been one of their “private ambitions to start a viral Internet hoax”. The writer then admits to having penned the alleged Netanyahu speech, thereby inadvertently achieving their goal of internet notoriety.

“I had done it!  Without even trying!  My fictional prose - my very own! - had gone viral as a chain email hoax!” the blogger said.

The fake speech began circulating again in May 2021 following fresh clashes between Israeli forces and Hamas. In response, the blogger published another post on May 13, 2021,  saying they had “created a monster” in the form of “viral fake news”.