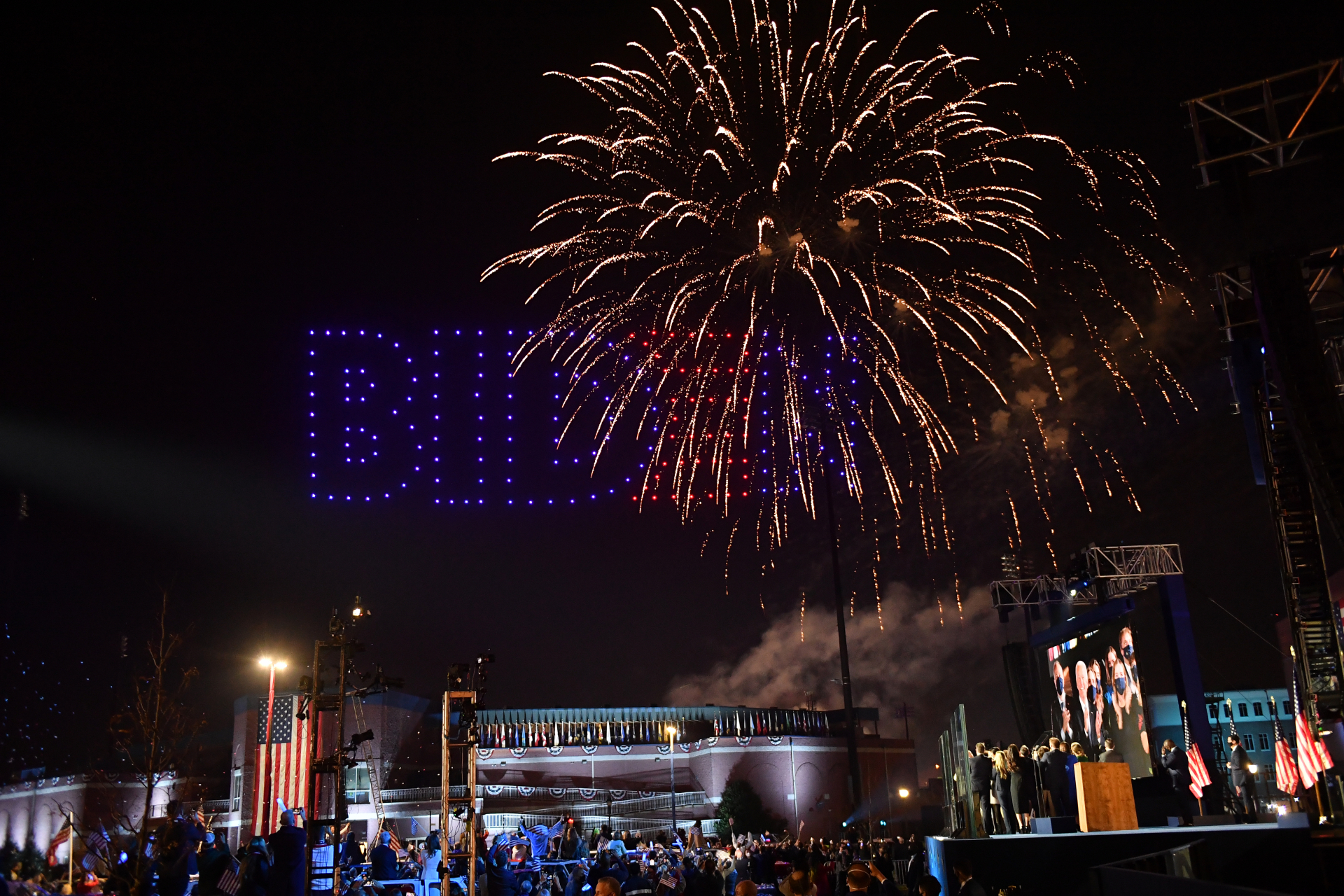 Illuminated drones spell “Biden” while fireworks explode in Wilmington, Delaware after Democratic candidate Joe Biden was projected the winner of the US presidential election, on November 7, 2020 (AFP / Angela Weiss)

An article and map shared thousands of times on social media days after the election claim that Donald Trump is leading Joe Biden if “illegal” votes are discounted, and that Trump still has “paths to victory.” The article is false; it relies on debunked claims and allegations that lack evidence after a vote which a national group of election officials declared the “most secure” in US history.

“Current Actual Election Result Update: President Trump Leading In Electoral College With More Paths to Victory Than Biden,” says the headline of the November 10, 2020 article in Gateway Pundit, which NewsGuard called a “super-spreader” of election misinformation. 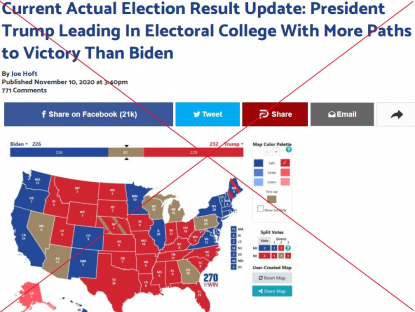 Screenshot from a false article, taken on November 12, 2020

A map and Electoral College count included with the article give Trump 232 electoral votes against Biden’s 226, with 80 still listed as a toss-up. In reality, at the time of the article’s publication Biden had at least 279 electoral votes compared with Trump’s 217.

By excluding the 46 Electoral College votes of Pennsylvania, Michigan and Wisconsin -- all of which were called days ago for Biden --  the article is able to falsely put Trump ahead.

“Based on actual results and accounting for states currently not called, still counting, recounting, under investigation or audit, or states with election issues now in the courts, President Trump is winning the 2020 Presidential Election,” it says.

But a November 12 statement from federal and state election officials, including from the Cybersecurity and Infrastructure Security Agency and the National Association of Secretaries of State, said, “The November 3rd election was the most secure in American history.”

Despite “many unfounded claims and opportunities for misinformation about the process of our elections,” they found “no evidence that any voting system deleted or lost votes, changed votes, or was in any way compromised.”

AFP breaks down the claims made by Gateway Pundit state by state:

“President Trump was up by 700,000 votes on election night but more than a million ballots were added since that which eventually stole the election for Biden,” it says.

This echoes claims by Trump and his lawyer Rudy Giuliani, who tweeted on November 4 that Trump had a lead of 700,000 votes and it was “cheating” to claim the race was still too close to call.

Trump was initially ahead in Pennsylvania but data accessed later on November 4 by AFP Fact Check showed that more than one million mail-in ballots still needed to be tallied. As the counting continued, livestreamed by 11 cameras and watched by Republican and Democratic observers, Biden did overtake Trump two days later.

US media then projected a win for the Democrat in Pennsylvania, giving Biden 279 Electoral College votes against 214 for Trump. The president falsely claimed he won, has refused to concede, and insists the election was rigged even as Biden presses ahead with the transition.

Government officials and monitors in Pennsylvania have repeatedly stressed the integrity of the state’s election process.

“Early in the morning after the election more than 100,000 votes magically appeared in Milwaukee,” Gateway Pundit said, repeating a claim it made on November 4.

That earlier article is based on a graph from analysts at FiveThirtyEight, which showed a sudden surge in votes for Biden between midnight and 6:00 am on November 4.

As FiveThirtyEight reporter Maggie Koerth pointed out, the sharp increase in votes was due to Milwaukee absentee ballot results announced at 3:56 am on November 4. Most of those more than 460,000 votes went to Biden.

“There’s nothing ‘magical’ about these vote drops: counties simply released a large batch of results all at once,” Curt Villarosa, a publicity manager for ABC News, which owns FiveThirtyEight, told AFP in an email.

“There were over 100,000 votes dumped in Detroit and the lead here was stolen from Trump as well. Once the illegal votes are eliminated President Trump has a very good chance of winning this state as well,” Gateway Pundit claims.

“The ‘dumped’ rumor likely started from a graphic that got circulated the day after the election claiming 138K votes for Biden ‘magically’ appeared overnight,” Tracy Wimmer, director of media relations for Secretary of State Jocelyn Benson, told AFP by email.

“The information contained in the graphic is entirely false.”

On November 4 reports spread online that the number of Biden votes spiked by more than 130,000 as ballots continued to be counted. But the apparent jump was caused by human error when a zero was accidentally added during the tallying.

Caroline Wilson, clerk of Shiawassee county in central Michigan, told AFP by phone, “I added an extra zero accidentally,” thereby reporting 153,710 votes for Biden instead of 15,371.

“The minute it was discovered, it was corrected, probably within 20 minutes,” she said.

When Biden’s 153,710 votes were lowered to 15,371 votes in a correction, 138,339 votes were removed from the Democrat’s total tally without any changes to Trump’s numbers.

Trump’s campaign on November 10 sued Benson and Wayne County seeking to halt certification of the state’s election results over irregularities including the counting of “illegal and ineligible” ballots. The suit makes no mention of votes being “dumped,” nor does it claim a definitive figure of 100,000 or otherwise. It alleges a few examples that involve dozens of ballots.

The tally in Detroit, which is part of Wayne County, was “transparent and accurate,” Benson’s office said. The Secretary has also called the lawsuit “a PR strategy, a political strategy, more than a legal strategy.” 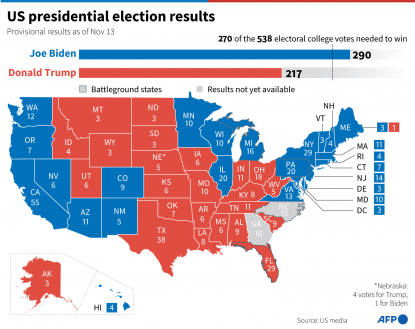 An AFP graphic showing Electoral College votes by state, as of November 13, 2020, after the US presidential election

“The President was winning this state on election night by 100,000 votes. But after the election a program was put in place to basically harvest a number of ballots,” Gateway Pundit claims.

Ballot harvesting is the collection of ballots by third parties, which occurs before the count but raises concerns about election integrity. In Georgia ballot harvesting is illegal unless it is done by relatives, a caregiver, or people in the same household.

“We believe that the ballots were counted accurately with the machine count,” he said, expecting the recount to confirm the existing outcome. “I’m a Republican… but the results will be the results.”

“There is much fraud here as well. Signatures were not verified on hundreds of thousands of votes. It is likely that President Trump will win this state if any of the ineligible votes are eliminated here,” Gateway Pundit claims.

There is no evidence for the signature verification claim.

Experts say safeguards including signature verification, which is done manually in some counties, are proven to work. The biggest threat may not be overcounting but the opposite, because ballots can be rejected if voters’ signatures change.

Two Nevada Republican candidates for Congress filed a lawsuit in which one woman, Jill Stokke, claimed a mail-in ballot she had not signed was counted in the election. As a result, she sought to halt use of signature verification machines throughout Clark County, which includes Las Vegas. 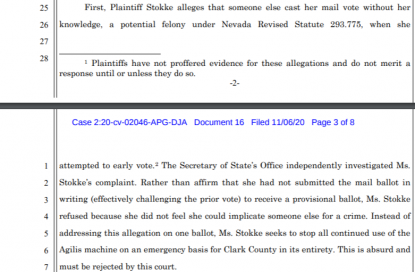 Contacted by AFP about the Gateway Pundit claim, the Nevada Secretary of State’s office referred to this statement which said “all creditable allegations of fraud” are being investigated.

“Due to the delays in counting and recording a winner, it is likely this state is being stolen from President Trump as well. What a mess,” Gateway Pundit said.

At the time that article was written only some US media had called Arizona and its 11 electoral votes for Biden, but that changed late on November 12 when remaining TV networks also declared him the winner, turning the state Democrat blue for the first time since 1996.

Biden was ahead by more than 11,000 votes according to the state’s unofficial tally, with a few hundred final votes to be counted and reported November 13 in the largest county, Maricopa.

Secretary of State Katie Hobbs has said there is “zero credible evidence of any impropriety or widespread irregularities” in the state.

Distinguished Professor Kathleen Dolan, a political scientist at the University of Wisconsin Milwaukee, told AFP by phone that the Gateway Pundit claim is “ridiculous” and “ignoring reality” after a smooth election which left Biden ahead.