Skip to main content
A boy uses a mobile phone outside a shop during a government-imposed nationwide lockdown as a preventive measure against the COVID-19 coronavirus, on the outskirts of Islamabad on April 7, 2020. (AFP / Farooq Naeem)

Clickbait headlines on several Pakistani news articles published in November 2020 claim that British film producer Jemima Goldsmith, ex-wife of Pakistani Prime Minister Imran Khan, has given birth to a baby girl. The articles were shared hundreds of times in multiple Facebook posts. The claim is false; the misleading posts link to an Instagram post by Goldsmith in which she announced the birth of her niece in April 2020.

The claim was published here on Facebook on November 6, 2020. It has been shared almost 500 times.

The post features a photo of Goldsmith, a British film and television producer, with her brother Ben Goldsmith. The Urdu-language text overlay reads: “Announcement of daughter’s birth ------ Jemima Goldsmith announced the good news astonishing for the entire world.”

It also includes a link to a news article by 24/7 Daily News Point with the same headline. The November 6, 2020 Urdu-language report by 24/7 Daily News Point linked in the misleading Facebook post actually says that Jemima announced the birth of her niece on Instagram.

“Jemima Goldsmith shared a photo of her brother Ben holding his newborn daughter in his arms.” A screenshot taken on November 13, 2020 of the misleading online report

It states: “Welcome home, Vita Iris Goldsmith- my perfect little niece who left hospital today after a terrifying two weeks in the ICU & thanks to the brilliant doctors and nurses, a miraculous recovery. I love you so much already even tho’ we haven’t yet met❤️ So many congratulations to @bengoldsmith & @jemimagjones.” 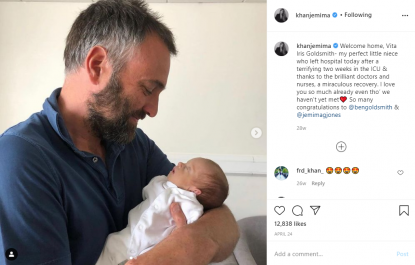