British Airways did not mandate vaccines for pilots

Social media users claim that British Airways pilots died from Covid-19 vaccines, which some who made the online allegations say the airline mandated, leading to talks with the UK government over whether pilots can fly after inoculation. While the company experienced the loss of several pilots, it denies any link between the deaths, does not insist on vaccination for those who fly their planes, and both a regulatory agency and the company denied being in “crisis talks.”

In an audio recording shared online, an unidentified person claims that a “friend,” a British Airways pilot, said three other pilots working at the airline died in a short period of time. The recording was shared as early as June 17, 2021, according to a search using social media analysis tool CrowdTangle.

“They’ve had the third BA (British Airways) pilot die in the last seven days,” the person heard in the recording says, linking the deaths to the pilots’ vaccinations. “Because of this, BA are now in crisis talks with the government about whether to allow vaccinated pilots to fly. The issue with that of course is that about 80 percent, according to my friend in BA, 80 to 85 percent have been (vaccinated),” the person adds. 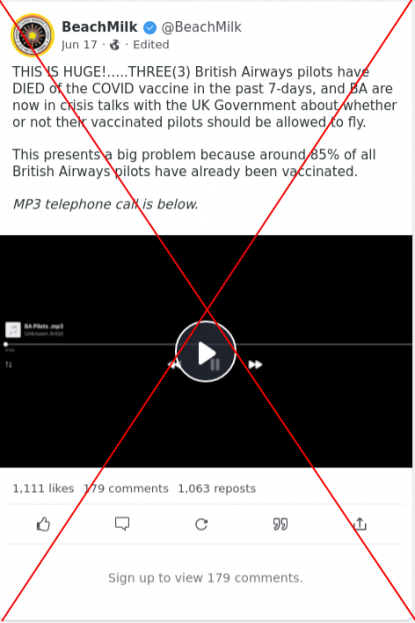 Variations of these claims have since circulated across social media, including here, here and here -- all blaming Covid-19 vaccines for the deaths of the British Airways staff members.

They are among claims around the world which misleadingly suggest a causal relationship between the shots and various adverse events, including death.

“Four British Airways pilots dead in one week (post jab). Please don’t fly British Airways. First they are directly responsible for mandating these deadly requirements, and morally liable for the death of their employees,” it reads.

The airline confirmed in a tweet on June 17, 2021 that “four members of our pilot community passed away recently,” but it added: “there is no truth whatsoever in the claims on social media speculating that the four deaths are linked.” 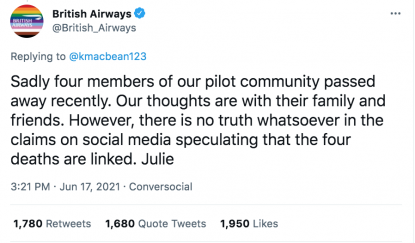 Contacted by AFP for further comment, British Airways said it was not in “crisis talks” with the government, nor did it “mandate vaccines for pilots.”

Branch, director of vigilance and risk management of medicines for the agency, added that “there are currently no restrictions” on what the aviation or other sectors can do post-vaccination.

British Airways did not disclose the names of the deceased to AFP.

Through an online news search, however, AFP found a report on the death of British Airways pilot Nicholas Synnott. According to British newspaper The Independent, Synnott “spent a record 243 days in a hospital in Texas while suffering from Covid-19” before returning home and dying in a UK hospital.