Images that show a meteor have been shared widely in Twitter and Facebook posts that claim these were shot in Thailand in June 2021. But this claim is false: the images are unrelated to recent meteor sightings in Thailand and have in fact circulated online since October 2015.

The Thai-language post translates as: “Who is in Chiangmai, they said a loud noise was heard along with green light during around 18:35 it is [an] #asteroid!!! #Chiangrai #meteor”. 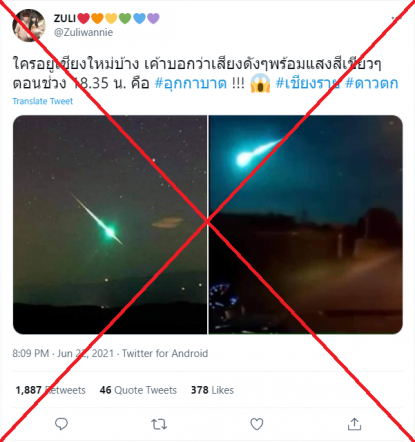 The misleading post circulated the same night social media users in Chiang Mai and other areas in northern Thailand reported seeing flashes of light in the sky followed by loud noises.

The National Astronomical Research Institute of Thailand (NARIT) confirmed the event was due to a meteor that had broken off from an asteroid and entered the Earth’s atmosphere.

Identical images were also shared alongside a similar claim on Facebook here, here and here; and on Twitter here and here.

The claim is false: the images have circulated online since at least 2015.

A reverse search on Google found the first image was posted here on Instagram by weather photographer Marko Korosec on October 31, 2015.

Its caption reads in part: “This spectacular and very bright bolide (fireball) from Southern Taurids meteor shower was observed this evening at 18:12 UTC, Oct 30th, 2015. Looking towards south from Brkini, SW Slovenia.”

Below is a screenshot comparison of the first image in the misleading post (L) and Korosec’s photo (R):

The image was also shared here on the website Spaceweather.com on October 31, 2015 -- and credited to Korosec.

A further reverse search found the second image corresponds to the 59-second mark of this YouTube video posted on November 2, 2015.

The video’s caption reads: “Collection of the November 2, 2015 meteorite clips in Thailand”.

Below is a screenshot comparison of the second image in the misleading post (L) and its corresponding frame in the YouTube video (R):

Video clips showing the same meteor were also shown in this news report aired on November 4, 2015 by Thai broadcaster Ch.3.