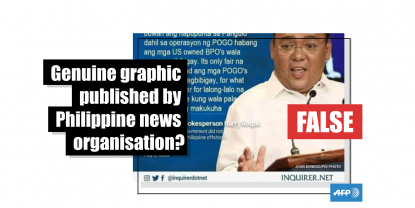 Published on Wednesday 6 May 2020 at 11:35
A text graphic with a quote attributed to a Philippine government spokesperson has been shared repeatedly in multiple Facebook and Twitter posts. The graphic, which purports to quote the spokesperson as saying President Rodrigo Duterte receives millions of dollars from offshore gaming operations, contains a logo for an online news organisation based in the Philippines. But the graphic has been doctored; the Philippine news organisation, The Inquirer, said it had been digitally altered from an earlier post on its Facebook page; the presidential spokesperson also said the graphic was “fake”.
Read more 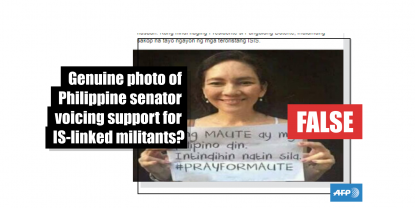 Published on Friday 1 May 2020 at 04:33
A photo has been shared hundreds of times in multiple posts on Facebook alongside a claim that it shows Philippine senator Risa Hontiveros holding a placard that urges Filipinos to pray for the Maute, an Islamic State-linked group that temporarily took control of a city in the country’s south in 2017. The claim is false; this image has been doctored to include a manipulated placard, and the original photo shows Hontiveros voicing support for people affected by Super Typhoon Haima in 2016.
Read more 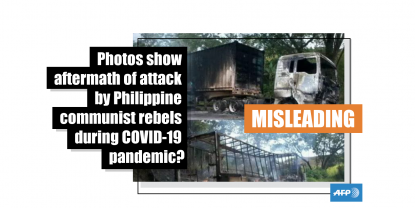 Published on Friday 1 May 2020 at 01:15
An image has been shared in multiple posts on Facebook, Twitter and Reddit alongside claims that it shows trucks carrying COVID-19 relief that were set on fire by rebels of the New People’s Army (NPA), the armed wing of the Communist Party of the Philippines. However, the image has been shared in a misleading context; it has circulated online since at least 2015 – years before the COVID-19 pandemic – in posts about supply trucks targeted by NPA rebels.
Read more 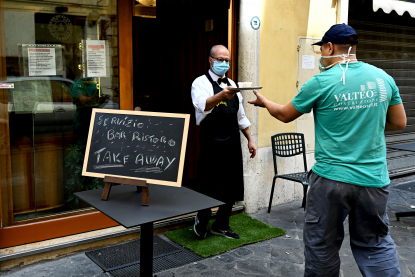 WHO warns against self-medicating for COVID-19 with aspirin, lemon juice and honey 'remedy'

Published on Thursday 30 April 2020 at 09:10
Multiple Facebook posts claim that aspirin, lemon juice and honey have been combined to make a "home remedy" for COVID-19 in Italy. The claim is misleading; the World Health Organization (WHO) has warned against self-medicating for COVID-19, saying there is no current medicine that can effectively treat the disease; official guidance released by the Italian Ministry of Health about the coronavirus does not mention the purported home remedy.
Read more 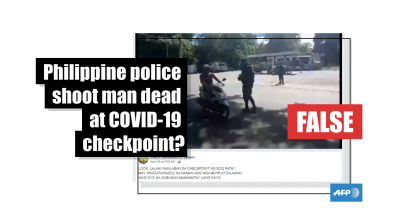 Published on Tuesday 28 April 2020 at 10:35
A video has been viewed thousands of times in multiple Facebook posts alongside a claim it shows police shooting a man dead at a COVID-19 checkpoint in the Philippines. The claim is false; the Philippine National Police said that the video shows a “training drill”; a closer analysis of the footage shows the man moving several times shortly after the sound of a gunshot rings out.
Read more