This 2011 video shows rebels during Libya's war, not Boko Haram fighters in Nigeria

A video has been shared thousands of times on Facebook with the claim that it shows Boko Haram insurgents hoisting their flag in Niger state, close to Nigeria’s capital Abuja. This is false: the clip, filmed in 2011 during the Libyan Civil War, shows rebel fighters at the western entrance to the city of Ajdabiya.

The now-deleted video was viewed more than 300,000 times on Facebook with a caption on the post that read: “Boko Haram in Niger state”. It added that the terrorists had raised their flag and were just two hours drive from Nigeria's capital Abuja. 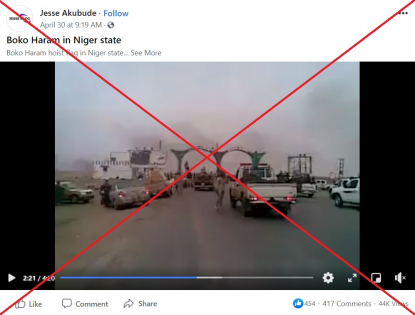 A screenshot taken on May 5, 2021, showing one of the false posts

The same video was shared here and here, also claiming that Boko Haram had taken territory in central Nigeria, a few hundred kilometres from the nation’s seat of power.

Boko Haram is a terrorist group in Nigeria seeking to create an Islamic caliphate.

The video, however, is neither recent nor does it depict scenes in Nigeria.

A quick analysis of the video suggests that it was not shot in Nigeria.

Secondly, the flags in the video are green and not the black of Boko Haram.

Screenshots taken on May 5, 2021, showing a Boko Haram flag (L) and a green flag from the video shared in the false post

Further into the video, prominent green arches are visible over the road, suggesting a gateway into a city or town. AFP Fact Check ran a number of reverse image searches and found pictures of the arches taken in the Libyan city of Ajdabiya -- a location some Facebook users had already hinted at in the comments below the post before it was deleted. 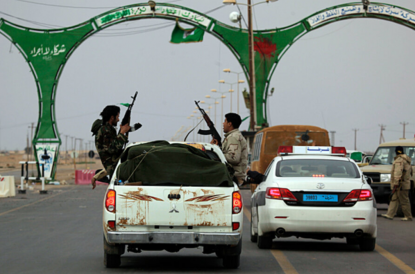 A screenshot taken on May 6, 2021, showing the arches from the video

A separate search for images and videos from Ajdabiya uncovered this 10-year-old video from the Libyan Civil War, produced by Russian news agency RT and uploaded to YouTube. It provides a clear view of the arches and a small white building with black stripes, both visible in the Facebook  video.

Screenshots taken on May 5, 2021 showing the white building with black stripes in both the video from the false post (L) and RT’s footage of Ajdabiya during the war

With the name of the city confirmed and approximate dates to go on, we searched AFP archives and found further images of the green arches in Ajdabiya, photographed in 2011 while Libya’s civil war was raging (see here, here and here).

When was the video shot?

Although the precise date of the video is unknown, the footage was captured at some point over four days in April 2011.

An AFP image from April 23, 2011, shows the green arches, known as the western gate in Ajdabiya, still standing. 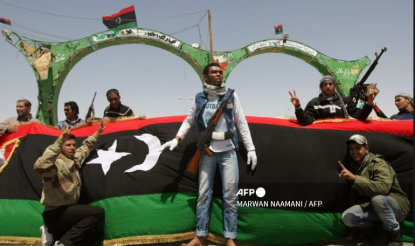 This photo taken on April 23, 2011, shows rebels at the arches before they were taken down

However, in this video by Al Jazeera from April 26, 2011, they have been pulled down. 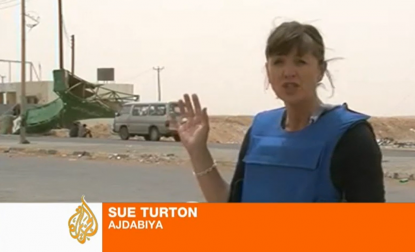 A screenshot taken on May 6, 2021 showing the green arches after they were pulled down

According to Al Jazeera, rebel soldiers fighting former Libyan leader Muammar Kadhafi demolished the gate because they believed the structures gave away their positions.

They were dismantled during a battle for control of Ajdabiya, an event widely reported in the media in 2011. An AFP reporter shared his experience of the fighting here.

On April 27, 2021, the governor of Niger state Abubakar Bello said Boko Haram had taken over some communities in his state, displacing thousands of people in north-central Nigeria.

Speaking to journalists on April 26 in Niger, he said Boko Haram had abducted women and “they have already placed their flag in Kaure, which means they have taken over territory”.

The government of Nigeria’s Federal Capital Territory (FCT) has assured Nigerians that the region is safe.