A screenshot shared on Facebook in South Africa claims that both McDonald’s and Coca-Cola have announced plans to cease hiring white people in leadership positions. However, the claim is false; both companies distanced themselves from the claim, confirming with AFP Fact Check that this is untrue. 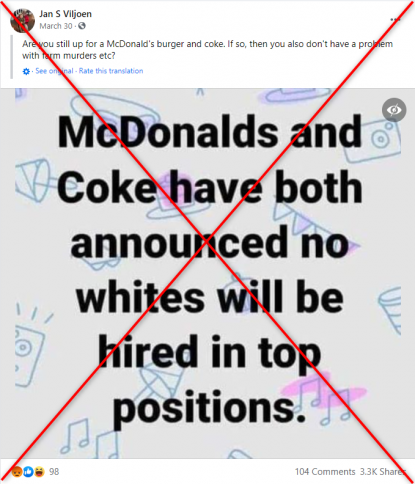 “McDonald’s and Coke have both announced no whites will be hired in top positions,” the screenshot reads.

The screenshot was also shared here in the United States in mid-March.

However, the claim is false. Neither McDonald’s nor The Coca-Cola Company have made any such announcements.

When contacted by AFP Fact Check, both McDonald’s and Coca-Cola said the claim being shared on Facebook is false.

“McDonald’s has not announced any plans to stop hiring people of white origin in top positions in its franchises across the globe. What the organisation is doing is that we are working on a plan to increase diversity among our workers,” company spokesman Daniel Padiachy told AFP Fact Check.

In February 2021, McDonald’s released a statement announcing an initiative to increase diversity. The announcement, however, did not preclude the future employment of white people in senior positions.

In the statement, the burger giant said that it wanted underrepresented groups in leadership roles to grow from 29 percent to 35 percent within the next five years in the US.

Anne Moore, a spokeswoman for Coca-Cola, also told AFP Fact Check that “this rumor is absolutely false. We will always hire the best-qualified candidates for any position anywhere in the world.”

In 2020, Coca-Cola announced an initiative on its official website to diversify its staff across all job levels to reflect “all people of colour in the United States” and to align with US census data for “race/ethnicity” by 2030.

The announcement said nothing about plans to stop hiring white people in top positions.