A black and white photo has been shared tens of thousands of times in Twitter and Facebook posts which claim it is an image from 1899 showing Swedish climate activist Greta Thunberg. The image has sparked an online furore, with many posts claiming it proved Thunberg was a time traveller, others saying it was doctored, and still more claiming it was evidence of reincarnation. But the black and white photo has actually been held in the archives of the University of Washington Libraries since the 1960s. UW said the image had not been doctored and was taken in Canada in 1898 by photographer Eric A. Hegg, who documented the Klondike gold rush. Thunberg was born in Sweden in 2003.

The black and white photograph was tweeted here by the Cool History account on November 19, 2019 with a caption saying: "Three children operating rocker at a gold mine on Dominion Creek, Yukon Territory, ca. 1898".

The resemblance between the girl seen in the left hand corner of the photo and teenage Swedish climate activist Greta Thunberg immediately prompted widespread online speculation.

"Damn... is that Greta Thunberg on the left??" one Twitter user wrote under the Cool History post.

Other users claimed the image must have been doctored, some people pointed out it had been circulating on Facebook for weeks alongside claims it proved Thunberg was a time traveller, other users said it was evidence of reincarnation.

I overlaid two pictures of her and lined up the face. From this simple alignment, which matches perfectly, this black and white photo has been photoshopped. Her face does not match the texture and focus of the rest of the photo. pic.twitter.com/X6qFx1pk0V

The "Time Traveller" theory took off and the photo was repeatedly reshared, for example here on Twitter on November 21, 2019.

The tweet says: “Turns out that Greta Thunberg is a Time Traveller after this 120 year old pic turned up today of the activist, pictured here in Canada's Yukon territory way back in 1899. What about that then?”

A similar claim was made here in a YouTube video titled “Greta Thunberg Found in 120 Year Old Photo?”, which has been viewed more than 40,000 times. 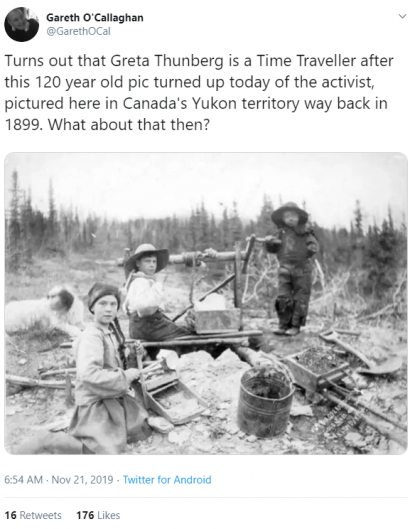 The internet debate over the image was picked up by mainstream media, with The Guardian, the New York Post and ABC Australia all running reports about Thunberg's purported ability to time travel.

Canada’s Global News even used a Twitter Poll to assess how many of its readers believe in the theory -- with some 40 percent of respondents claiming Thunberg was "obviously" a time traveller.

Do you think Greta Thunberg is a time-traveller who is here to save the world from the climate crisis?

The girl on the far left of the black and white photograph is wearing her hair in braided pigtails -- a similar style to that in which 16-year-old climate activist Greta Thunberg wears her hair.

Below is a screenshot comparison of the young girl in the photo published in the misleading post (L) and an 2019 AFP photo of Thunberg (R) which can be seen here on AFP's Image Forum website: 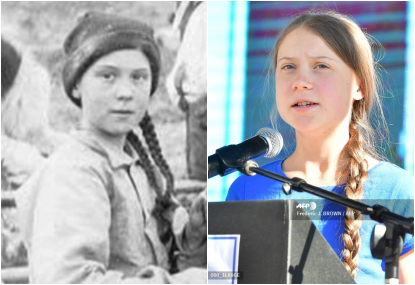 But the picture has not been doctored and it does not actually show Greta Thunberg.

The photo is part of the archive of the University of Washington Libraries, which confirmed the authenticity of the image and said it was taken in northwest Canada in 1898.

A reverse image search on Google of the image used in the misleading posts led to this November 21 blog post by the University of Washington (UW) Libraries debunking false claims about the photograph. 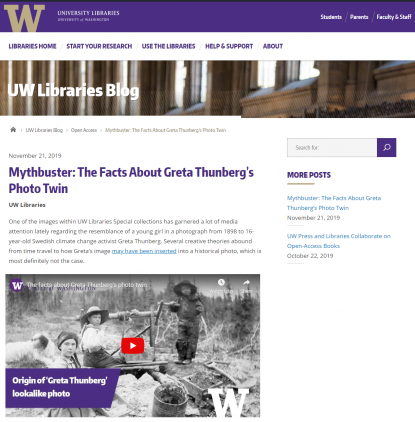 The post, which is titled “Mythbuster: The Facts About Greta Thunberg’s Photo Twin”, reads in part:

“One of the images within UW Libraries Special collections has garnered a lot of media attention lately regarding the resemblance of a young girl in a photograph from 1898 to 16-year-old Swedish climate change activist Greta Thunberg. Several creative theories abound from time travel to how Greta’s image may have been inserted into a historical photo, which is most definitely not the case.”

UW Libraries added that the image was taken by photographer Eric A. Hegg, whose work was added to the Libraries Special Collections in the 1960s.

The university also posted a video called "The facts about Greta Thunberg's photo twin" on its verified YouTube channel here:

The photograph is listed on the UW archive here with the title “Three children operating rocker at a gold mine on Dominion Creek, Yukon Territory, ca. 1898”.

The Yukon is a territory in northwest Canada, bordering the US state of Alaska.

There are no notes or documentation regarding the identity of the subjects, the library said.

Below is a screenshot comparison of the photo in the misleading post (L) and the one in the UW archive (R):

Thunberg was born in Sweden on January 3, 2003  according to multiple online biographies and reports, for example here, here, and here.

Thunberg first captured the world’s attention in August 2018, when she began skipping school to protest outside Sweden's parliament, demanding action to combat the climate crisis, which inspired the global movement School Strike 4 Climate.

She made a speech at the United Nations about climate disaster in September 2019.

Thunberg has become a target of online disinformation, as seen in these AFP fact-check reports.