A screenshot of an article claiming that Kenyan footballer Michael Olunga was offered 600 million euros to become a Japanese citizen has been shared hundreds of times on social media. But a spokesman for the striker's club told AFP that "there was no such decision" and wondered where such a huge sum of money would come from.

The widely-shared screenshot comes from an article by news site Kenyan Updates, which we've archived here. According to social media monitoring tool CrowdTangle, the article has racked up more than 9,000 interactions on Facebook since it was published on November 25, 2019.

“Harambee Stars top striker who plies his trade with Japanese second-tier team Kashiwa Reysol has today been offered £600 million in a bid to have him denounce his Kenyan citizenship for Japan,” the article reads.

The text quotes a figure in pounds rather than euros -- at the time of writing, one British pound was equivalent to 1.17 euros. 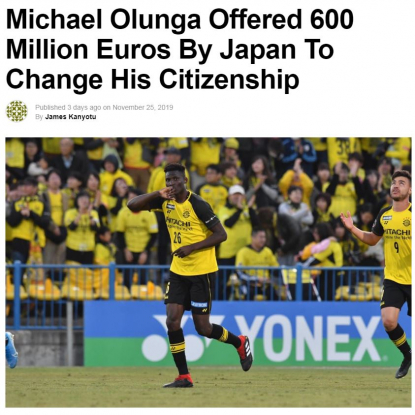 A screenshot of the fake article on Kenya Updates, taken on November 28, 2019

The screenshot was shared on several Facebook and Twitter pages, including here and here. It was also shared by popular Kenyan comedian Churchill, who has more than 2.5 million Facebook followers. AFP archived his post, which has attracted more than 5,000 reactions. 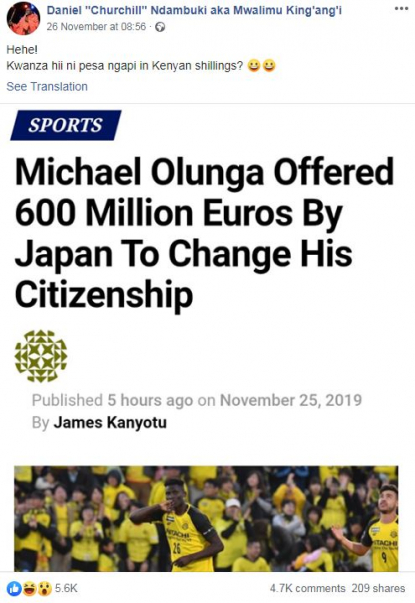 A screenshot of the fake post shared by Kenyan comedian Churchill, taken on November 28, 2019

Kenyan Updates' article was published the day after Michael Olunga scored eight goals for his Japanese team, Kashiwa Reysol in a match against Kyoto Sanga, securing a 13-1 victory on November 24, 2019.

But a Kashiwa Reysol spokesman told AFP that the star striker had not been approached with an offer of Japanese citizenship.

“There's no such decision regarding the citizenship and the offer of the money,” he said. "We haven't heard such information and we wonder where this information came from and who is going to pay such money."

It would legally be possible for Olunga to renounce his Kenyan citizenship and acquire the citizenship of another country. However, according to Fifa, the 25-year-old cannot be allowed to play for Japan’s national team as he has previously played in an official match for Kenya.

Fifa states that “any player who has already participated in a match (either in full or in part) in an official competition of any category or any type of football for one association may not play an international match for a representative team of another association.”

Olunga previously scored for Kenya in the 2021 Africa Cup of Nations qualifiers against Egypt on November 14, 2019.