A picture has been shared hundreds of times on Facebook and Twitter alongside a claim that it shows an eagle catching an Israeli surveillance drone flying over Gaza. The claim is false: the picture has circulated online in reports about an eagle catching a drone during a police exercise in the Netherlands in March 2016.

The picture of an eagle gripping a drone was posted here on March 15, 2021, on Facebook and has been shared more than 400 times since. 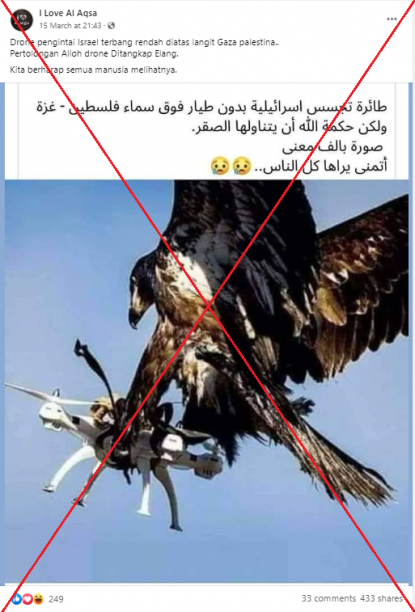 The Indonesian-language caption translates to English as: “Israel’s surveillance drone flies low over Gaza Palestine.
Allah helps the drone Caught by an Eagle.
We hope all humans see it.”

Meanwhile, the Arabic text superimposed on the picture translates to English as: “An Israeli spy drone in the sky of Palestine-Gaza, but thanks to God, it was captured by an eagle.”

The same picture was also shared with a claim in Arabic back in November 2019.

A Google reverse image search found that the picture was published by the Algemeen Nederlands Persbureau (ANP), a Dutch news agency, on March 7, 2016, here.

The picture was distributed by AFP on the same date, with a caption: “An eagle of the Guard from Above company, grasps a drone during a police exercise in Katwijk, on March 7, 2016. The bird of prey can get drones from the air by catching them with his legs.”

Below is a screenshot of the photo on the AFP Forum website:

Screenshot of the photo on the AFP Forum website

Guard From Above is a company based in the Hague, specialising in training birds of prey to intercept hostile drones.

Katwijk is a town in the province of southern Netherlands.

Below is the screenshot comparison between picture in the misleading post (L) and the photo on the AFP Forum website (R):

The BBC published a video report about Dutch police trained eagles to take down unauthorised drones on March 8, 2016, here, headlined: “Eagles trained to take down drones”.

In December 2017, the police halted the experiments with trained eagles due to cost and lack of demand, DutchNews.nl reported.