Several images of people covering their left eye have been shared hundreds of times in multiple posts on Facebook that claim they were showing solidarity with a Palestinian journalist who was blinded in one eye in the West Bank in November 2019. The post also includes a composite image of two photos of two journalists with eye injuries. The claim is misleading as some of the photos have been used in the wrong context; one photo collage of professional football players has been doctored to include eye patches; a photo in one composite image shows a different Palestinian journalist who suffered an eye injury in a separate incident.

The photos were published here on November 18, 2019, in a Facebook post. It has been shared more than 120 times. The post contains multiple composite images and several photos of people covering their left eye and holding signs.

The post’s Indonesian-language caption translates to English as: “SOLIDARITY ACTION OF COVERING LEFT EYE IN PALESTINE

“Several world football stars covering their eyes as an act of solidarity with Gaza journalist Muaz Amarineh who was shot in the eye by an Israeli sniper.
…

“Several Gaza journalists held a solidarity action for Muaz Amarineh who was shot by an Israeli sniper while covering a demonstration in Khalil, West Bank.
…

“We INDONESIA PRAY sincerely for you.” 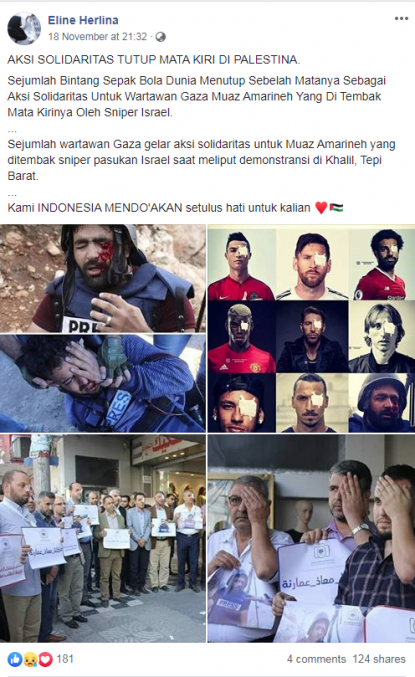 The journalist mentioned in the post, Muath Amarneh, was blinded in his left eye during clashes between Israeli border police and Palestinian demonstrators in Hebron, a city in the West Bank, on November 15, 2019. The misleading Facebook post’s caption refers to Hebron as Khalil, as it is also known. Amarneh claims that he was shot in the eye by Israeli forces, as AFP reported here. Israeli police have denied the charge.

Similar photos were also published alongside a similar claim on Facebook here and here. The posts have been shared more than 300 times.

The claim is misleading as some of the photos have been used in the wrong context. One photo in the first composite image shows a different Palestinian journalist who suffered an eye injury in a separate incident.

A reverse image search on Google and a subsequent keyword search found the first image includes a photo of Attia Darwish, a photojournalist who suffered an eye injury during protests in Gaza in December 2018.

The photo was published here in a report by the World Health Organization (WHO). The photo's caption reads: “Attia Darwish hit in the face by a tear gas canister.”

Below is a screenshot of the WHO report: 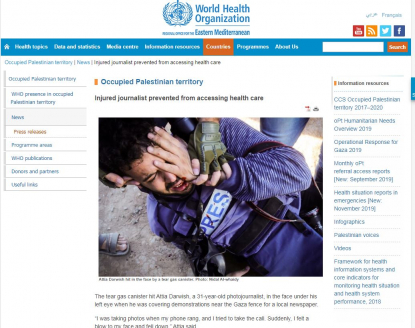 Screenshot of the WHO report

Another reverse image search found that the other photo in the first composite image does show Amarneh moments after he sustained the eye injury on November 15, 2019. The AFP photo was published here on November 15.

Below is a screenshot comparison of the first composite image in the misleading Facebook post (L) and the AFP photo and the photo published in WHO’s report (R): 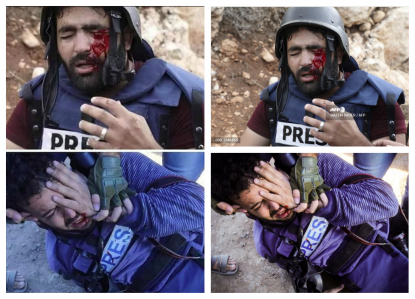 A reverse image and keyword search on Google found the manipulated image was originally published on Instagram account @artist.mans on November 17, 2019. The owner of the Instagram account, a designer named Muhammad Mansour, told AFP he edited the composite image. “That is my photo design,” he said via Instagram direct message.

His Instagram post's caption reads: “What if one of your favorite celebrities has been in an accident that caused him to lose one of his eyes. What would have been your reaction? fortunately this hasn't happened but unfortunately this is what happened to the journalist Moua'ad Amarneh as a result of being shot by one of the Israeli occupation snipers while covering the confrontations and outrage that is happening now in Hebron which caused the aforementioned journalist to lose his left eye.” 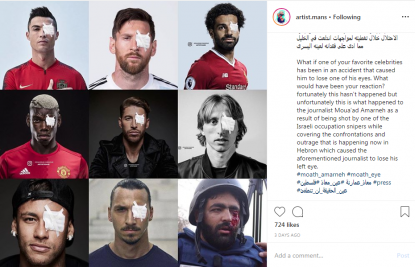 Screenshot of the original edited image

The Irish Sun published the photo of Ronaldo, which is credited to Nike, in its May 2018 report here. The article is headlined “EL COMANDANTE Real Madrid ace Cristiano Ronaldo reveals new nickname he’s been given by Portugal team-mates.”

The original photo of Pogba was taken by Paul Cooper, a UK-based commercial and editorial photographer, and was published on Cooper’s website here.

The photo of Ibrahimovic was published here in a Guardian report titled: “Zlatan Ibrahimovic: ‘Mourinho is cool - the older coaches get, the cooler they get.’” The photo is credited to Daniel Blom.

The unedited photo of Salah was found here on Seek PNG, a website that curates free PNG images.

The same image of Amarneh in the misleading composite image was published here on the Facebook page of the Quds News Network, a Palestinian news agency.

Below is a screenshot comparison between the second composite image (L) and the unedited photos (R): 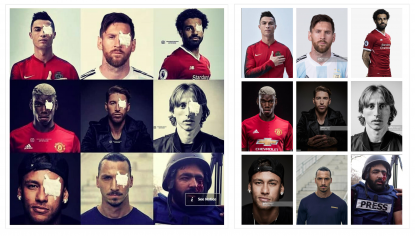 The other two photos included in the misleading Facebook do show journalists covering their eye in solidarity with Amarneh following his injury.

The images were watermarked by Suara Palestina News Agency, an Indonesian-language news agency focusing on Palestinian affairs, and were published on its Facebook page here and here on November 18, 2019.

Below is a screenshot comparison of the third image in the misleading post (L) and a photo from Suara Palestina’s Facebook page (R):

Below is another screenshot comparison of the fourth image in the misleading post (L) and a photo from Suara Palestina’s Facebook page (R):