A photo of  a student protester in India has been shared hundreds of times in multiple Facebook and Twitter posts alongside a claim that she was holding a placard littered with grammatical errors. The claim is false; the image has been doctored to include grammatical errors on the placard; the protester pictured in the image shared the genuine photo on her Twitter page almost one week before the misleading posts emerged online.

The manipulated photo was published on Facebook here on November 19, 2019. It has since been shared more than 300 times.

The post's Hindi-language caption translates to English as: “See the (knowledge) of Hindi of this JNU scholar, they actually wanted to write, ‘first clear the entrance test and then vent out on JNU'”.

JNU is the widely used acronym for Jawaharlal Nehru University in India’s capital New Delhi, where students have been protesting against a proposed fee hike. Baton-wielding police responded to the unrest as students were set to march on parliament on November 19, 2019, AFP reported here. 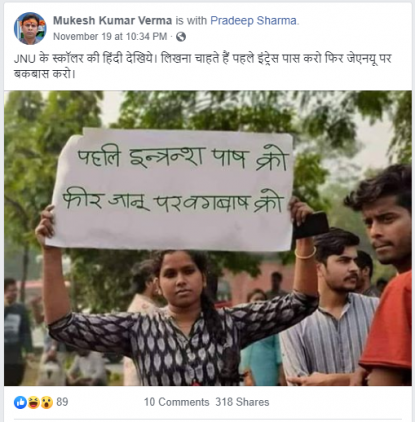 The claim is false; the image was doctored to replace the original placard with one that contains grammatical errors. 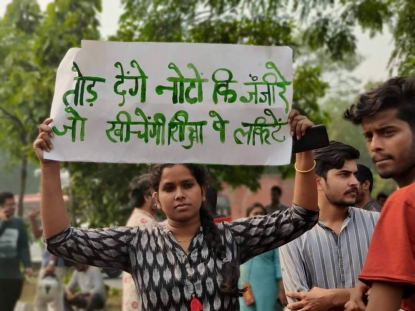 The Hindi-language slogan on the genuine placard translates to English as: “We will break the chains/obstacles of money, if that will try to keep us away from education."

A journalist in AFP's Delhi bureau identified the woman in the photo as JNU student Priyanka Bharti, who states on her Twitter profile that she was a candidate for president of the JNU Students’ Union.

Bharti has also posted several photos and videos of the recent protests on her Facebook and Twitter pages, including the authentic photo of her holding the original placard here on Facebook and here on Twitter. The image has been embedded below.

Below are two screenshots of the authentic image published by Daily Bihar (L) and Bolta Hindustan (R):

Screenshots of the genuine image published by local media