AFP Hong Kong Published on Tuesday 21 April 2020 at 04:55
A video of two Albanian female news anchors wearing revealing jackets on-air has been viewed tens of thousands of times on Twitter alongside a claim that they dressed promiscuously in a bid to persuade people to stay indoors during the COVID-19 pandemic. The claim is false; the footage first aired on an Albanian TV channel years before the COVID-19 pandemic.
Read more 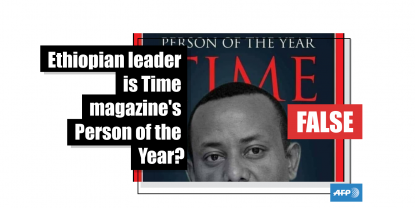 No, these are doctored images of Time magazine covers

Amanuel Neguede, AFP Ethiopia Published on Friday 21 February 2020 at 16:43Updated on Monday 24 February 2020 at 17:12
A claim that Ethiopian Prime Minister Abiy Ahmed was named Time magazine’s Person of the Year has been shared hundreds of times on Facebook. But this is false; although he was nominated in 2019, Abiy did not win the title or appear on the cover.
Read more 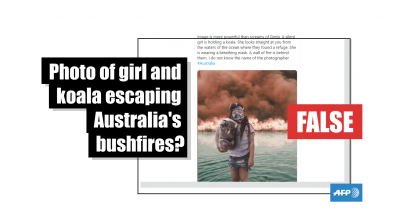 This virtual image was created by an artist in New South Wales, Australia -- it's not a real photo

AFP Australia Published on Wednesday 8 January 2020 at 04:45
An image that shows a masked girl holding a koala while a large fire rages in the background has been shared tens of thousands of times in multiple posts on Twitter and Instagram published in January 2020. The posts claim the photo shows a scene in Australia during the country's deadly bushfires. The claim is false; the posts show a virtual image created by an Australian artist using several photos.
Read more 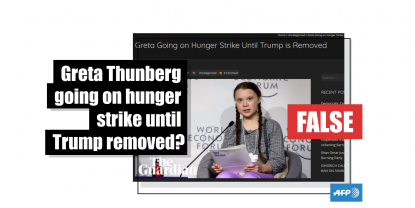 AFP Australia Published on Tuesday 31 December 2019 at 07:10
An online article claims that teenage climate activist Greta Thunberg is going on hunger strike until US President Donald Trump is removed from office. It has been shared repeatedly in multiple posts on Facebook and Twitter. The claim is false; the story originated on a parody website.
Read more 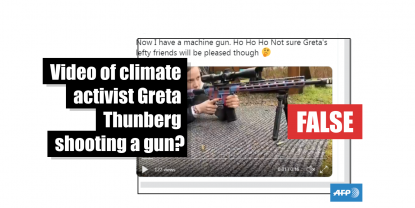 The woman in the video is not Greta Thunberg

AFP Brasil, AFP Hong Kong Published on Friday 27 December 2019 at 04:47
A video of a woman shooting a gun has been viewed millions of times on Twitter alongside an English-language claim that the woman is Swedish climate activist Greta Thunberg. The claim is false; the footage actually shows a Swedish engineer, who confirmed with Brazilian media she was the one featured in the video, which she posted on Twitter before it went viral on social media.
Read more