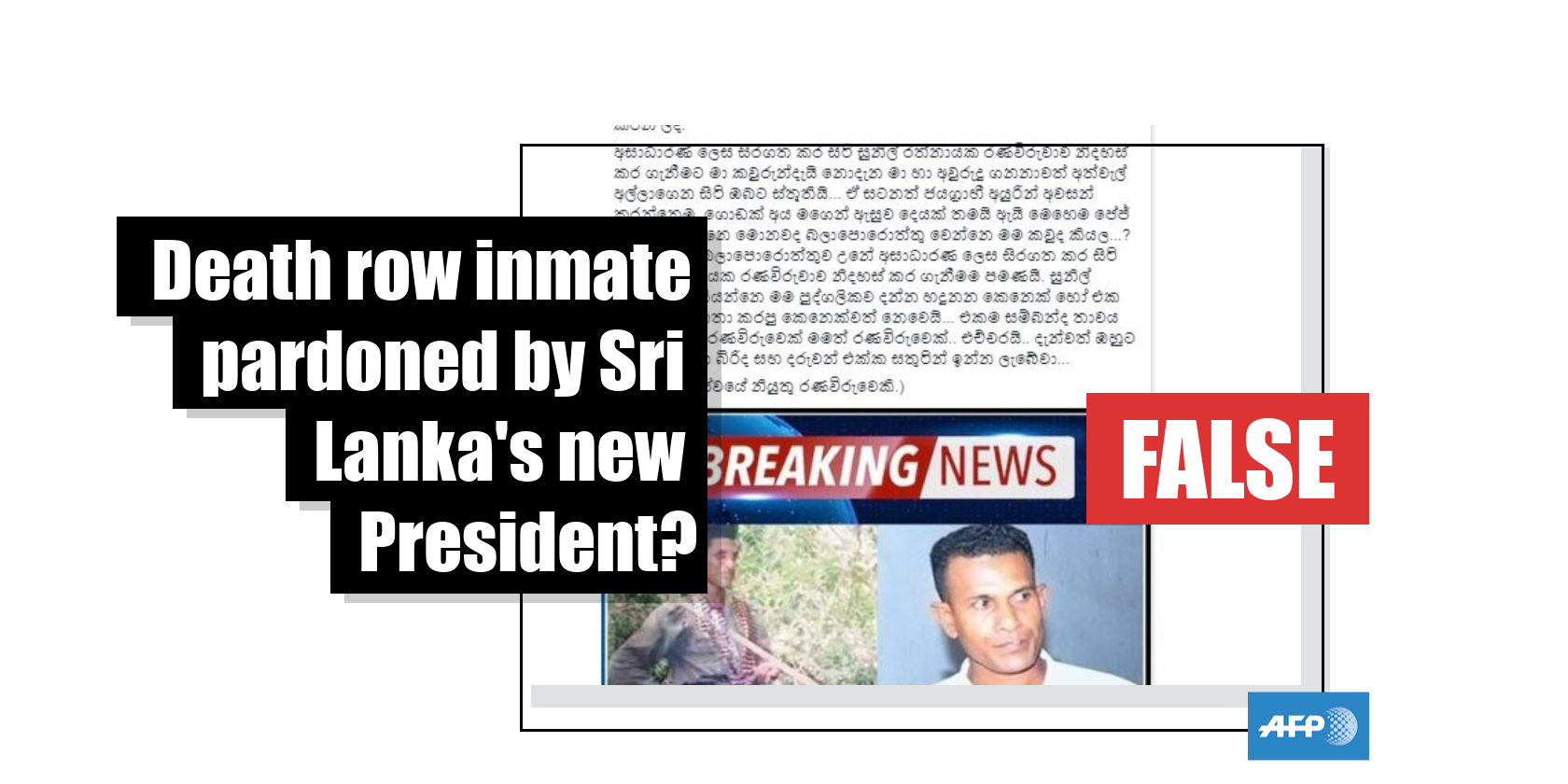 A post shared on Facebook and WhatsApp claim that a former army staff sergeant who was sentenced to death for the murder of eight Tamil civilians was "freed a few moments ago" on the orders of  Sri Lanka's newly elected President Gotabaya Rajapaksa. The claim is false; the Sri Lankan president's office said they had issued no such directive; the Sri Lankan Prisons Department told AFP that the former army staff sergeant  remains in jail.

The claim was published on Facebook here on November 19, 2019, where it has been shared more than 700 times.

"All those who joined hands with me over the years to free war hero Sunil Ratnayake who was unfairly imprisoned, I thank you for standing with me without even knowing my identity… That battle has been concluded victoriously…”

Former army staff sergeant Sunil Ratnayake was sentenced to death in June 2015 for the murder of eight Tamil civilians in 2000 in Mirusuvil, an area outside the northern city of Jaffna. 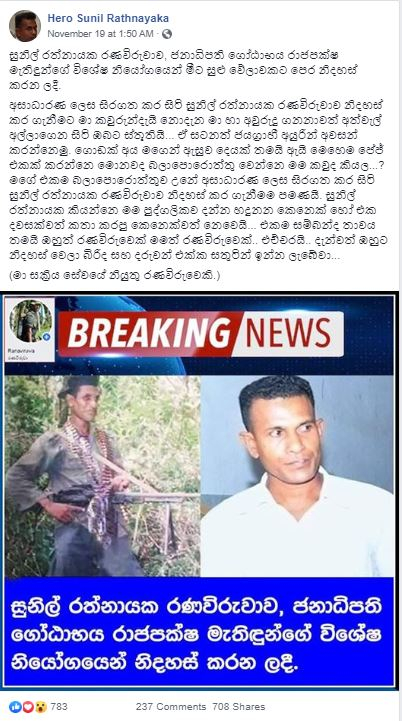 The post contains an image with a "breaking news" banner across the top, above two images of a former Sri Lanka Army Staff Sergeant Sunil Ratnayake.

There is also Sinhala text below the images of Gunawardena saying: “War hero Sunil Ratnayake was released by a special order issued by President Gotabaya Rajapaksa.”

The court ruling on Ratnayake, which came after a 13-year trial, was a rare instance of a civilian court convicting a soldier for crimes committed during the military’s decades-long conflict with Tamil forces. Here is an AFP report on the decision.

In May 2019, a five-judge bench of the Supreme Court rejected Ratnayake’s appeal, unanimously affirming the conviction and death sentence.

The claim has been shared repeatedly on Facebook, for example here and here.

Some Facebook users appeared to believe the claim, posting messages of appreciation to Rajapaksa for issuing the pardon. 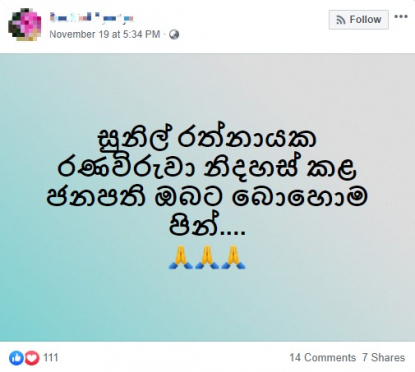 The claim is false; the president's office said he had not issued any such directive, and the country's Prisons Department said the inmate remained in jail.

The Director General of Presidential Media, Mohan Samaranayake, told AFP by phone that there was no such directive.

"I have checked into the claim with the relevant authorities and can confirm no such decision was made and no such directive has been issued by the President," he said.

The new president tweeted a warning here on November 21, 2019, urging Sri Lankans not to believe any purported presidential statements unless they had been released through official channels.

There are many false news items being shared on social media, claiming to be statements and decisions by me.

Kindly note that all decisions will only be communicated officially through President’s office, President’s Media Divison or my official social media channels. pic.twitter.com/HSwCNUSTiZ

The Sri Lankan Prisons Department told AFP they had not received any directive to release Ratnayake or been informed of any presidential pardon issued by Rajapaksa.

“No such request or instruction has been issued to free the prison Sunil Rathnayake,”  K D B Jayasinghe, the Administration Division’s Commissioner of Prisons, told AFP in a phone interview on November 25.

"The inmate mentioned in the claims is still in prison," he said.

The Prisons Department’s refutation of the misleading claim on social media was also published here in the Daily Mirror, a Sri Lankan media outlet, on November 20.