These photos show new generation and commemorative coins in the Philippines, not new coins minted for a paperless currency

Five images have been shared tens of thousands of times in multiple posts on Facebook and Twitter alongside a claim they show coins created for a new coin-only currency system in the Philippines. The claim in false; the photos show next generation and commemorative coins that were minted by the Philippine central bank.

The images purport to show new coins in circulation, including a 5,000-peso coin, which would amount to approximately US$100.

Below is a screenshot of the misleading post, with the coin photos numbered by AFP: 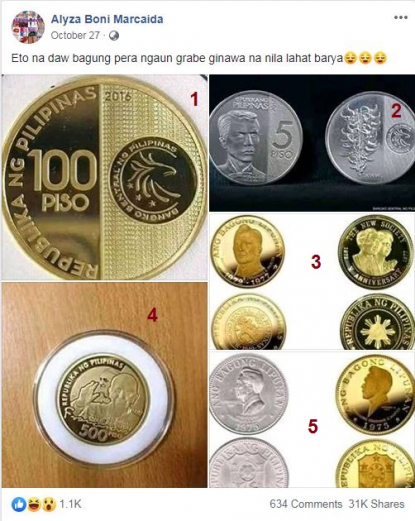 The post's Tagalog-language caption translates to English as: “Heard these are the new money now seriously they made everything coins".

Several Facebook posts, for example here and here, have shared the same photos with similar captions that claim the Philippine currency is now coin-based. The same photos have also been shared on Twitter here.

But the claim is false; a review of the Philippine central bank’s official website shows the coins were minted as new generation and commemorative coins.

The first photo, while it does not appear on the central bank’s website, is a commemorative coin that is not in circulation, the bank said.

“The said coin is a commemorative non-circulation coin, minted to commemorate the 165th anniversary the Bank of the Philippine Islands,” a bank spokesperson said in an email to AFP on November 22.

The rest of the coins pictured in the misleading Facebook posts are listed on the website of the central bank, which maintains the sole legal authority to issue new currency under Philippine law.

The second photo shows a new generation coin that was released by the bank on March 26, 2018. It is shown here in a media release, which states that the coin was minted to improve “aesthetics and security.”

Below is a screenshot comparison showing the second photo in the misleading Facebook post (L) and the corresponding photo from the central bank’s press release (R):

The third and fifth photos appear on this central bank page about commemorative currency, which the bank explains are expensive coins minted to “honor a specific person or recognize the significance of a place or event that made a mark in the history of Philippines.”

The central bank notes that these coins, which bear the faces of Marcos and his wife Imelda, remained legal tender up until April 30, 2019.

The fourth photo shows a limited edition 500-peso papal coin minted to commemorate Pope Francis’ visit to the Philippines in 2015. It is shown in this central bank media release, alongside a commemorative 50-peso papal coin.

The coins were released on January 14, 2015 and were created under a license agreement from the Vatican, the press release states.

Below is a screenshot comparison showing the third, fourth and fifth photos in the misleading post (L) and their corresponding photos from the central bank’s website (R): 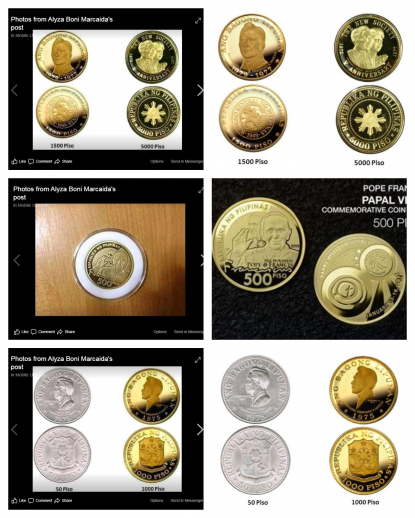