Video posts viewed thousands of times purport to show South Africa’s President Cyril Ramaphosa announcing an alleged 81-day lockdown. But the video has been edited to change the context of an earlier speech he made during a national news broadcast. The TV channel which aired the original segment has refuted the doctored video and there have been no official announcements from the presidency to extend the ongoing 21-day lockdown set to end on April 16, 2020. 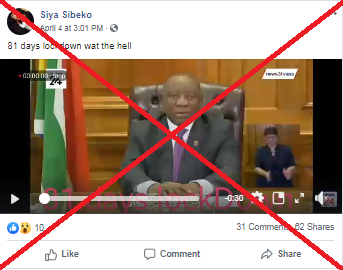 The video has been shared here and here on other Facebook posts -- it’s also been adopted as a text post from a fake Ramaphosa Facebook page. 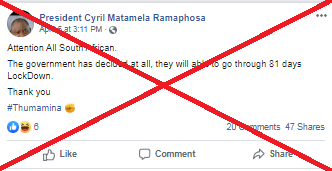 “The clip was created by manipulating an old News24 video. This video clip is fake,” the broadcaster said in a post on its verified Facebook page on April 6.

The original video shows Ramaphosa speaking about students and teachers who were repatriated by South Africa after spending almost two months in lockdown in Wuhan, China.

"The experience of these South Africans who returned from Wuhan should give us the courage to carry on with the lockdown that the government has decided on; they were able to go through an 81-day lockdown,” Ramaphosa said during an address to the nation on March 30, 2020, four days after South Africa’s confinement period began.

Ramaphosa addressed the nation on March 23 to announce the 21-day lockdown. There has been no announcement of a lockdown extension on any of his official platforms.

President @CyrilRamaphosa briefs the nation on escalation of measures to combat the #COVID19 pandemic #CoronaVirusSA https://t.co/8eKVRg2x84

Ramaphosa defended the three-week lockdown earlier this week, saying an assessment would be done in the coming days.

"We will be able to make a proper scientific assessment in a few days time to see how well this lockdown is serving the people of our country," he said.