A video of a ghost-like drone scaring people off the street has been viewed thousands of times on Facebook, Twitter, YouTube and Weibo alongside a claim that the footage shows a drone being used to enforce social distancing during the novel coronavirus pandemic in the Australian city of Brisbane. The claim is false; the video was published online in 2016 in a post about a prank in São Paulo, Brazil.

The 51-second video has been viewed hundreds of times since being published on YouTube here on March 30.

The post circulated as Brisbane and several other parts of Australia remained on lockdown to curb the spread of the novel coronavirus, which has killed more than 85,000 people and infected over 1.4 million others worldwide, according to the World Health Organization. 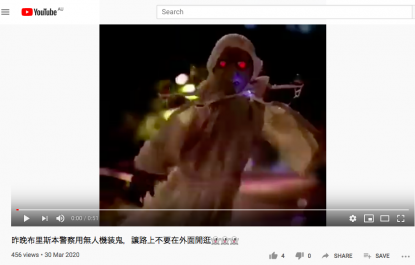 The video was also viewed thousands of times alongside a claim that the drone patrol was deployed in Italy, such as here, here and here; and in other unspecified locations during COVID-19 social restrictions, seen here and here.

A reverse image search found a longer version of the video in the misleading posts published on here YouTube on September 26, 2016, nearly four years before the novel coronavirus pandemic.

Below is a screenshot comparison of the video shared in the misleading posts (L) and the 2016 YouTube video (R):

The 2016 footage also shows the skyline of São Paulo, Brazil’s most populous city, and several of the city’s major thoroughfares, including the Avenida Paulista tunnel at the 19-second mark. The footage matches the tunnel as seen here on Google Street View.