A video has been viewed hundreds of thousands of times in multiple posts on Facebook alongside a claim it shows Myanmar’s President Win Myint after he was detained in a military coup on February 1, 2021. The claim is false: the video shows Win Myint being driven in a car after he was elected president in 2018. 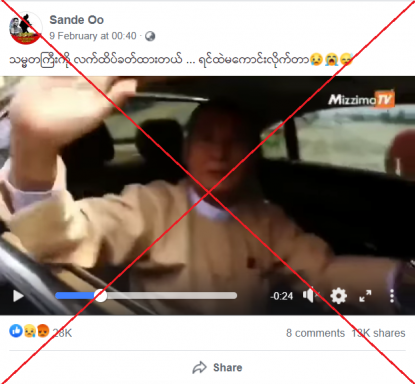 “The president was handcuffed. I feel sadness in my heart,” the Burmese-language caption reads.

Win Myint was president of Myanmar under Aung San Suu Kyi’s civilian government before the military seized power in a coup on February 1, 2021. The military declared a year-long state of emergency and detained Win Myint, Suu Kyi and other top politicians. As of February 17, 2021, the detained politicians have not been photographed in public since the coup.

The military justified its seizure of power by alleging widespread fraud in November elections that Aung San Suu Kyi's NLD won in a landslide.

Comments from some social media users on the video in the Facebook post indicated they were misled by it.

One user commented: "[The president] is not a bad guy or a thief to be handcuffed! May the bad luck return to the vultures as soon as possible."

Another commented: "Too cruel. The wicked guys bullying the righteous with their weapons. Did they handcuff the [president] based on their reasoned knowledge? I feel so sorry. Let the truth win. Let those who steal and bully others fail."

The video was also shared alongside a similar claim here, here, here and here.

The claim is false: the video was filmed almost three years before the military coup in 2021.

A keyword search found a longer version of the video here. It was published on the official Facebook page for Myanmar broadcaster Mizzima TV. It reported on Win Myint’s election as president on March 28, 2018. 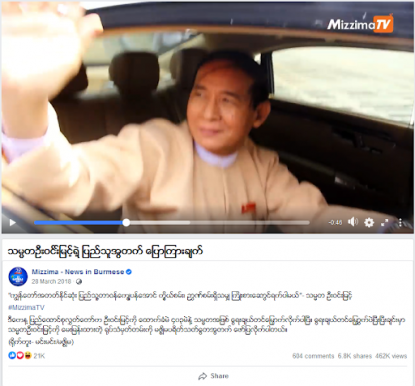 The Burmese-language title of the report translates to English as: “President Win Myint's message to the people”.

“Today, the Pyidaungsu Hluttaw elected U Win Myint as President with 403 votes (out of 636 votes). Following the voting, Mizzima has released a video interview with President Win Myint,” the video’s description reads in part.

In the video, Win Myint can be seen sitting in a car. The video in the misleading posts corresponds with the Mizzima TV footage from the 20-second mark.

In the clip, Win Myint can be heard telling reporters: “I will do my best to fulfill my responsibility for the people. Thank you, all media".

The original footage shows that Win Myint was not handcuffed in the car, as claimed in the misleading posts. He can be seen wearing a wristwatch on his left hand, which some social media users may have mistaken for handcuffs. 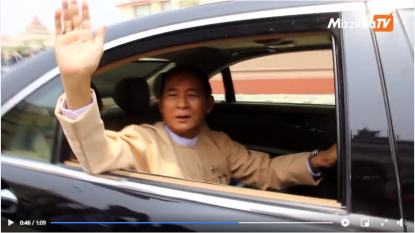