Facebook posts claiming the World Health Organization says a “child’s presence in school counts as ‘informed consent’ for vaccination” have been shared repeatedly in New Zealand. The posts are misleading: New Zealand's Ministry of Health says written parental consent is required before children under the age of 16 are vaccinated; the screenshot shared in the misleading Facebook posts shows one section of a 2014 WHO report which has been taken out of context; the WHO says it does not recommend specific vaccination consent procedures.

A New Zealand-based Facebook user here posted a screenshot of an article with a caption saying: “Seriously WTH. Time to ensure your kids are not at school on Vax day folks.” 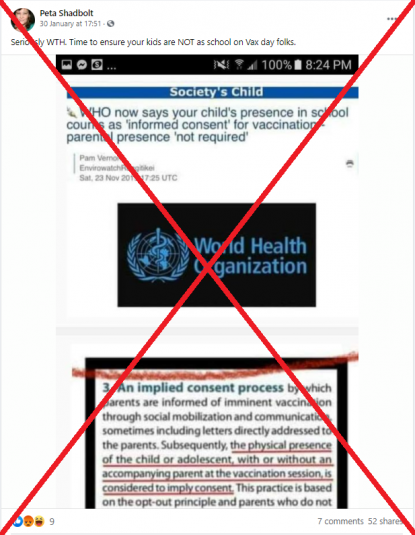 The screenshot shared in the post shows an article that is headlined: “WHO now says your child’s presence in school counts as ‘informed consent’ for vaccination - parental presence ‘not required’.”

The screenshot features the logo of the World Health Organization and text with a heading that reads: “3. An implied consent process”.

Part of the subsequent text is underlined and reads: “The physical presence of the child or adolescent, with or without an accompanying parent at the vaccination session, is considered to imply consent.”

The article shared in the screenshot appears to have been published here on a New Zealand-based website.

The text in the article was taken from this 2014 WHO report titled “Considerations regarding consent in vaccinating children and adolescents between 6 and 17 years old.”

The original article was shared over ten thousand times, according to data from the social media monitoring platform CrowdTangle.

The article and the claims made in the Facebook posts, however, are misleading.

A spokesperson for the New Zealand Ministry of Health said that “written consent from parents/guardians is required" for children under the age of 16 to receive vaccinations at school.

The agency’s Immunisation Consent policy also states the consent process can only be undertaken “after the parent/guardian has had the opportunity to read the immunisation information and discuss any areas of concern”.

“Consent forms are provided for immunisations given in schools by public health nurses and may also be used in mass vaccination settings. For children aged under 16 years who are being immunised at school, written consent must be obtained from the parent/guardian,” the policy reads.

Individuals over the age of 16 are able to self consent, according to the policy.

The Ministry of Health spokesperson added that the Pfizer Covid-19 vaccine has only been approved for people above the age of 16 “so there is no expectation of school-based COVID-19 immunisation at this stage”.

The WHO does not say that sending your child to school equates to blanket consent to vaccinations, as the article suggests.

“WHO does not recommend one specific approach to consent,” a spokesperson for the organization told AFP in an email on February 16.

“Approaches to consent can vary considerably across countries and settings depending on national consent laws and policies," they added.

The 2014 WHO report, only part of which is shared in the misleading article, outlines three commonly used consent processes for vaccination programs: written, verbal and implied.

Implied consent requires parents be informed of any imminent vaccinations and given the opportunity to opt out, a WHO spokesperson told AFP.

After that, the presence of a child at the school vaccination session would be seen to “imply consent,” according to WHO guidelines.

The 2014 WHO report stressed that when a child is unaccompanied by their parents it can be “challenging to determine whether parents indeed provided consent” and urges countries to “adopt procedures that ensure that parents have been informed and agreed to the vaccination”.