Multiple Facebook posts shared hundreds of times claim there has been no decline in the number of glaciers on Earth since former US vice president Al Gore was born in 1948. The claim, however, is false: experts told AFP that the posts use incorrect statistics. The world's glacier ice volume has steadily declined since at least 1950, they said.

The image was published by a New Zealand-based Facebook user here on February 6, 2021. The post has been shared more than 260 times. The post includes an old photo of former US Vice President Al Gore. Since leaving office in 2001, Gore has become a leading environmental activist. He created the climate change documentary An Inconvenient Truth in 2006 and helped negotiate the 2016 Paris Agreement to curb global warming.

The graphic was also shared hundreds of times on Facebook here, here and here.

However, the claim in the graphic is false, according to experts.

A spokesperson from the World Glacier Monitoring Service (WGMS), a United Nations-supported organisation, said the posts shared incorrect statistics. “The exact number of glaciers in 1948 is not known,” the spokesperson said in an email on February 16.

Dr Lauren Vargo, a glaciologist at the Victoria University of Wellington, told AFP that approximately 198,000 glaciers exist today, not 130,000, according to the latest research.

Most estimates for the number of glaciers worldwide, however, come from satellite imagery, which “was not available in 1948,” Vargo said in an email on February 12.

She went on to explain that the number of glaciers is not significant when measuring the impact of climate change on dense ice formations.

“Instead, the total glacier ice volume is what's important… one large glacier could recede so much that it turns into 2 or 3 small glaciers, but still losing ice volume,” she said.

Dr Heather Purdie, a glaciologist from the University of Canterbury, told AFP that glaciers are receding rapidly due to global climate change.

“Glaciers are made of snow and ice and so they exist on the Earth's surface in a delicate balance. If it gets warmer ice melts - simple as that." - Dr Heather Purdie, University of Canterbury.

“Glaciers are made of snow and ice and so they exist on the Earth's surface in a delicate balance. If it gets warmer ice melts - simple as that,” she said in the February 15 email.

This 2015 study in the Journal of Glaciology, warned the rates of early 21st-century glacier ice mass loss are without precedent on a global scale "at least for the time period observed and probably also for recorded history.”

The WGMS has reported similar findings, noting here that 141 of the 150 glaciers it monitored in 2018 and 2019 decreased in mass. The group also found that since 1950 eight out of the ten most negative mass years were recorded after 2010.

“Glaciers lost more than 9,000 billion tons of ice between 1961/62 and 2015/16, raising water levels by 27 millimetres… this global glacier mass loss corresponds to an ice cube with the area of Germany and a thickness of 30 metres,” the WGMS spokesperson said.

The WGMS graphic below illustrates the downward trend of glacier ice mass since 1950. 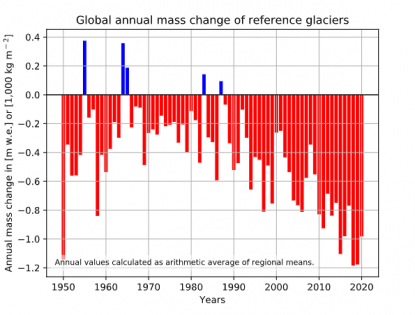 "The total glacier ice volume is what's important… one large glacier could recede so much that it turns into 2 or 3 small glaciers, but still losing ice volume." - Dr Lauren Vargo, Victoria University of Wellington