A video has been shared in multiple Facebook posts and WhatsApp messages alongside a claim it shows a crowded railway station in the Indian port city of Mumbai in February 2021. The posts claim the video shows a huge crowd at the station after suburban railway services were resumed on February 1, 2021 following a Covid-19 lockdown. The claim is false: the footage has been circulating online at least since 2016, several years before the coronavirus pandemic. 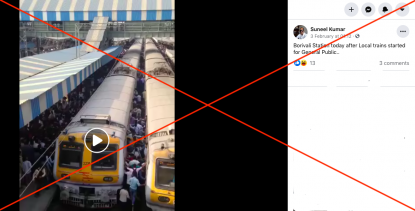 Borivali station connects the eponymous suburb with the centre of Mumbai.

Local train services in India’s densely populated financial capital resumed for the general public on February 1, 2021 after an almost one-year hiatus due to the nationwide coronavirus lockdown that started in March 2020.

Some trains had already resumed service for essential workers in June 2020.

The video has also circulated here and here on Facebook alongside a similar claim.

The claim, however, is false. A reverse image on Google using keyframes from the video found the original footage uploaded to YouTube here on March 21, 2016.  The clip has garnered more than 2.7 million views. YouTube user Navin Poojary, who uploaded the clip, said in the comments claims that the video was filmed at Borivali railway station.

Below are photos comparing the similar structures seen in the misleading video (L), and a Google photo (R) at the Borivali railway station highlighted as ‘A’ and ‘B’ by AFP: 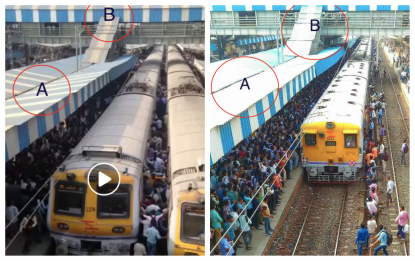 Several other users uploaded similar photos here and here on Google of the same bridge and roof at Borivali station.