This video shows teachers protesting an education scheme in India

A video has been viewed tens of thousands of times in multiple posts on Facebook that show four women burning a piece of cloth. One of them later caught fire. The posts were shared alongside a claim that they were protesting against the hijab in India. The claim is false; the video has been shared in a misleading context; it was included in Indian news reports about teachers protesting an education scheme in the northern Indian state of Punjab in 2010.

The Indonesian-language caption translates to English as: “Anti-hijab demonstration in India

"Hindu women in India protest against hijab-wearing for Muslim women by burning the hijab.

“But what happened? God had made several Hindu women who staged the protest pay for their wrongdoing. They are burning. God is the Greatest.”

The word "Dzolim" used in the caption is the Indonesian spelling of the Arabic word “Zulm”, which translates to English as “wrongdoing” or “injustice”. 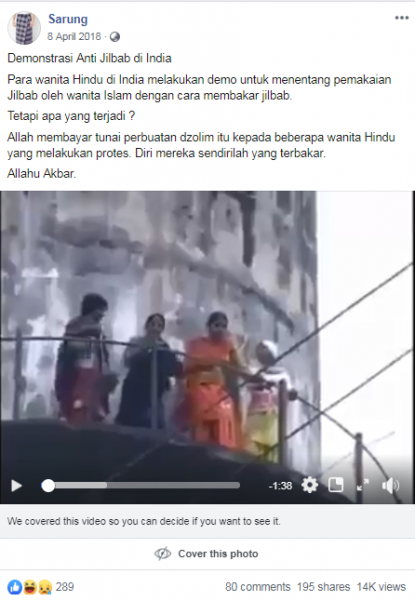 The video has also been shared in other 2018 Facebook posts here, here and here with a similar claim.

It has in fact been circulating online since at least 2014, such as here and here.

The claim is false; the video was included in Indian news reports about teachers protesting an education scheme in the northern Indian state of Punjab in 2010.

The same women can be seen in various clips, shot from a slightly different angle, in this February 8, 2010, news segment uploaded to YouTube by Indian TV channel Zee News.

Kapurthala is a city in Punjab.

Below is a screenshot comparison between keyframes from the video in the misleading post (L) and the Zee News video (R):

A fact-check journalist in AFP’s Delhi bureau analysed the footage and heard people shouting slogans against police and urging others to hurry up and take the woman to hospital.

The Times of India reported here the protest happened in Kapurthala on February 8, 2010.

The report states in part: “A 27-year-old woman set herself ablaze after climbing atop a water tank on Sunday evening, demanding enhancement of marks in her high school exams that would help her get admitted to an elementary teachers training course. She was in a critical condition till late in the evening.”

The Indian Express also reported about the protest in this article published on February 8, 2010.

The report states in part: “Protesting against the Punjab government in support of their demands, a teacher climbed atop a 100-foot high water tank here and tried to end her life by setting herself on fire. Kiranjeet (27), a resident of Faridkot district, suffered 90 percent burns and her condition is stated to be critical.”

NDTV reported here on February 8, 2010, that the teacher later died from her injuries.

The report states in part: “A 27-year-old teacher, who set herself on fire in this Punjab town during a protest, died in a private hospital in Ludhiana early on Monday, doctors said.”