This photo actually shows an ABC News crew at a Hong Kong protest on October 1st, 2019

A photo has been shared hundreds of times in multiple posts on Facebook, Weibo and Twitter, which claim it shows “Caucasians” directing a pro-democracy protest in Hong Kong from an “action command centre”. The claim is false; American broadcaster ABC News said the photo shows its staff working at the protest; AFP separately identified one of the men seen in the photo as an ABC News journalist.

The photo was published here on Facebook in a public group called “Alliance In Support of Our Police Force Official FB Fans Page”.

It was published on October 3, 2019, two days after Hong Kong pro-democracy protesters staged a large demonstration against China’s National Day. Here is an AFP news report about the events.

In the photo, several people can be standing next to a black people carrier with license plate CX7. A second black vehicle with registration plate CX78 can also be seen in front of the car. 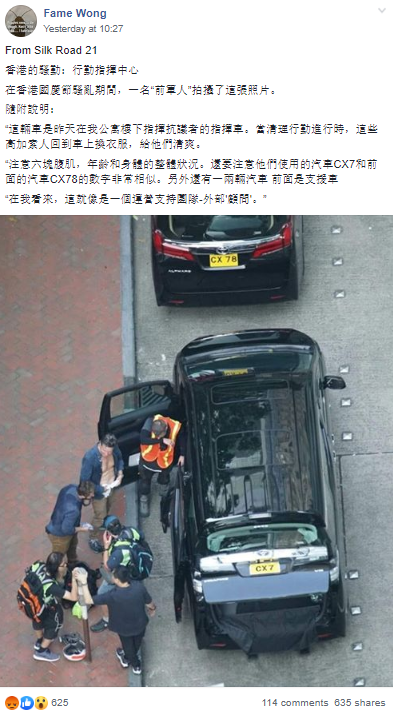 “During Hong Kong’s riots on the National Day, an ‘ex-soldier’ took this photo. The attached caption:

“‘This is the command car that commanded the protesters downstairs from my apartment yesterday. As the clearance proceeded, the Caucasians returned to the car to change their clothes and refresh.

“Pay attention to the six abdominal muscles, age and the overall body condition. Also note that the number of the car they use, CX7, is very similar to that of the car CX78 in front of them. There are one or two other cars the one in the front as support vehicles.

“To me this looks like an operational support team -- external 'advisers'.”

Another Facebook post published earlier on the same date in Facebook group 21SilkRd can be seen here with a similar caption in English. It has been shared more than 150 times.

The claims are false. American broadcaster ABC News published this news article on October 3, 2019, clarifying that the photo in fact shows its news crew working at the protest in Hong Kong.

The report states in part: “A photograph circulating on social media misidentifies Senior Foreign Correspondent Ian Pannell and an ABC News crew as ‘external advisers’ and ‘an operational support team’ for protesters in Hong Kong.

“The picture was taken on Tuesday apparently from an apartment building at the intersection of Star Street and Monmouth Path in the Wan Chai district of Hong Kong, next to the Three Pacific Place office building. The photo also misidentifies a vehicle used by the ABC News team as a ‘command car directing the protesters.’

“The ABC News team was in Hong Kong on Tuesday covering the unauthorized protest march in the Admiralty District, including the clearance operation outside the Hong Kong Government headquarters. The ABC News team had previously positioned its vehicles on Monmouth Path.”

The report also contained a screenshot comparison of the photo in the misleading post with photos of Pannell in Hong Kong.

Below is a screenshot comparison of the misleading image (L) and Pannell’s photo in the ABC News article (R): 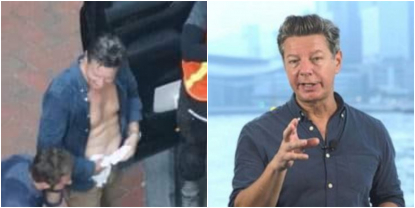 A video included in the ABC News article shows Pannell broadcasting live in Hong Kong from the one-minute 56-second mark. The video is embedded below:

Pannell separately tweeted this video and this photo of events in Hong Kong from his official Twitter account on October 1, 2019.