This list was not published by Harvard University, but a student newspaper

Two images have been shared thousands of times in multiple Facebook, Twitter and Instagram posts alongside a claim they show Harvard University’s list of its "55 most difficult courses". The claim is false; the list was not published by Harvard. It was taken from a 2017 article published by a student newspaper about the “most difficult majors in America”, ranked according to information submitted by students.

The photos were published here on Facebook on July 22, 2019.

They have been shared more than 3,000 times after being posted to a Facebook page with more than 280,000 followers.

The images purport to show a list of 55 academic degree courses ranked in order of difficulty. “Architecture” is ranked in first place, and “Public Relations” is in the 55th place.

The post’s caption states: “55 most difficult courses. Source : Harvard University. What position is your course?” 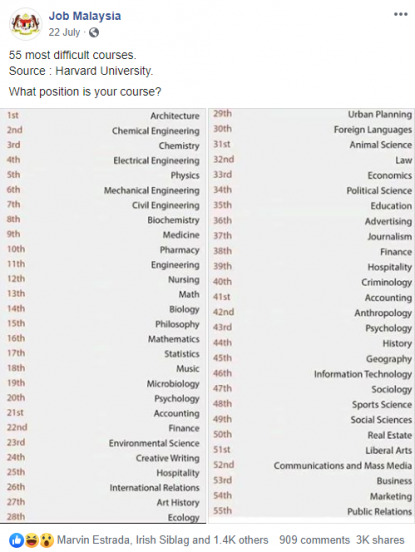 The claim is false; a reverse image search on Google found the source of the list is not Harvard University, but this 2017 article by student newspaper The Tab.

The article’s headline states: “Ranked: The most difficult majors in America”.

An image published in the article shows the same list and includes a header text, which was cropped in the misleading posts.

The text states: “Which is the most difficult major in America?”

Below is a screenshot of the photo from the 2017 article:

Screenshot of photo from The Tab

The Tab describes itself as a "site covering youth culture and student culture".

In the article, it states the list of the most difficult majors was compiled based on an analysis of “self-reported results”, such as GPA scores, time spent studying, all-nighters pulled and even hours napped.

The article states in part: “Based on extensive data analysis, we have found Architecture is the most difficult major. On average those studying it work the most hours during the week, pull the most all nighters, have the highest GPA, nap the least and are stressed out more than any other degree.

“Our in-house data expert Matt Pencer explains our methodology: ‘Through a weighted-analysis of thousands of self-reported results from surveys conducted by NSSE and The Tab, we have worked out which majors are the most difficult. The Tab used data on the number of hours students spend studying, all-nighters pulled, hours napped, GPA, and how often students said they feel stressed to compile a ranking of 55 majors.’”

While some social media users seemed to believe the list in the misleading posts, others were more sceptical and wondered why some majors were mentioned twice.