A video has been viewed millions of times in multiple posts on Facebook that claim it shows Myanmar police beating up students at a school. This video was shared online after Myanmar students planned to stage a nationwide boycott of schools, which reopened in June 2021 for the first time since the military seized power. The video, however, has been shared in a misleading context: the clip shows a scuffle between students and police outside a Myanmar courtroom in March 2020, almost one year before the military coup.

This video was shared here on Facebook on May 28, 2021. It has been viewed more than three million times.

The post’s Burmese-language caption translates to English as: “Look at this if you want to send your children to school. Do you think we should let this happen?” 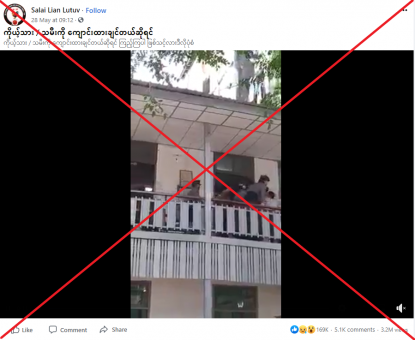 Schools reopened in Myanmar on June 1, 2021 for the first time since the military seized power in a coup in February 2021. But teachers and students called for a boycott of lessons in a show of resistance, as AFP reported here.

Another user wrote: “There is no reason for [the police] to be in the school, they are doing whatever they want now.”

The same video was shared with a similar claim on Facebook here, here, here and here.

The video, however, has been shared in a misleading context. It predates the coup by almost one year.

Below is a screenshot comparison of the video in the misleading posts (L) and the April 2021 video (R):

A keyword search on Facebook found a 15-minute Facebook live video of the same incident shared here on March 12, 2020.

It was posted on the Facebook page for the All Burma Federation of Student Unions.

Below is a screenshot comparison of the video in the misleading posts (L) and the video shared by the Burma Federation of Student Unions (R):

Myanmar Now reported on the same incident here on March 24, 2020.

The article’s headline translates to English as: “All Burma Federations of Student Unions demand resolution for ‘police abuse’ outside the courtroom”.

Members of the student union were arrested after they allegedly held an illegal gathering by staging a protest, the report says.

The video was filmed outside Kamaryut Court in Yangon.

Below is a screenshot of the video in the misleading posts (L) and a photo of the court geotagged on Google Maps (R):