People are not dying from meat infected with lumpy skin disease

Facebook posts shared thousands of times warn that four people have died in Thailand after eating meat infected with lumpy skin disease, a viral infection in cattle. The claim is false. Thai authorities told AFP the reports were baseless, and the disease is not transmissible from animals to humans.

"Please be careful, there is a disease that is spreading among cows and pigs in Thailand which makes them get lumps like zombies," the Burmese-language caption reads.

"Four people have died from eating virus-infected meat. They are still waiting to see if the virus can spread to humans. People in Thailand are no longer eating beef, pork and fish."

The post shared photos of cattle suffering from lumpy skin disease, a potentially fatal condition which is spread by insects and causes nodules on the skin. 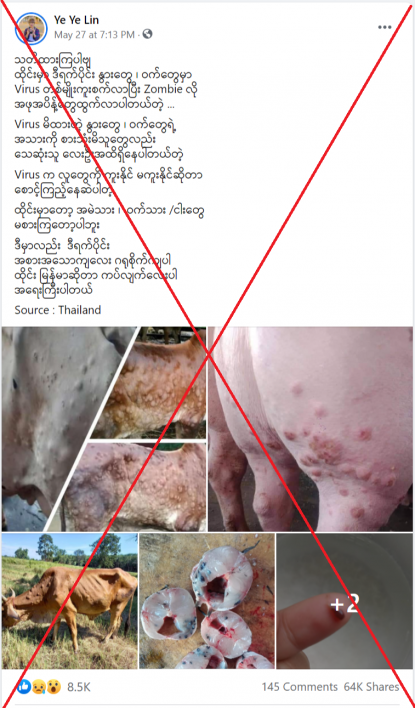 The screenshot of the misleading post, taken on June 3, 2021

Similar warnings were shared on Facebook here, here and here.

The posts surfaced after a lumpy skin disease outbreak in Thailand, which infected thousands of cattle and aggrieved farmers already hit by the pandemic.

More than 22,000 cases of the disease had been reported across 43 provinces, an official from the Bureau of Disease Control and Veterinary Services told AFP.

While authorities announced plans to fly in hundreds of thousands of doses of vaccines and restrict the movement of cattle to slow the spread of the disease, there has been no prohibition on the consumption of meat or fish.

"Scientifically, this disease cannot be transmitted from animals to humans. Despite this, we have always recommended against the consumption of infected meat," the official from the Bureau of Disease Control and Vetenary Services told AFP.

"There are no reported deaths from the consumption of lumpy-skin infected livestock," the bureau added.

The Food and Agriculture Organization of the United Nations said in a field manual for veterinarians that "lumpy skin disease does not affect humans".