Skip to main content
A medical staff member administers a dose of the Sinovac Covid-19 coronavirus vaccine at a university in Qingdao in China's eastern Shandong province on on March 30, 2021. (Photo by STR / AFP)

A video of crowds packed along a street has been viewed tens of thousands of times in Twitter posts claiming it shows people rushing to receive Covid-19 jabs in the southern Chinese city of Yulin. The video has been shared in a misleading context: it was actually filmed in China’s Chengdu city.

The footage shows hundreds of people huddled together, with people's hands on their neighbour's shoulder, as they shuffle down the street. 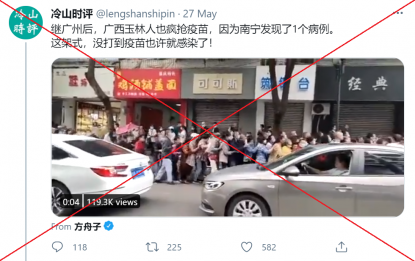 The post’s simplified Chinese-language caption reads: “After Guangzhou, people in Guangxi’s Yulin also rushed for vaccination because one case was found in Nanning. Look at this scene, you may be infected without receiving a vaccine!”

The southern Chinese city of Guangzhou saw an uptick in Covid-19 cases in May 2021, AFP reported here.

The street is situated in Chengdu in China's southwestern Sichuan province.

Below is a screenshot comparison of the video in the misleading posts (L) and the street view on Baidu Maps (R): 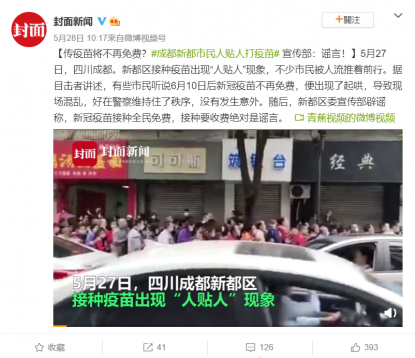 Screenshot taken on June 4, 2021, of the Weibo video by West China Metropolitan Daily

The Weibo post’s caption states that the video shows a crowd queuing for Covid-19 vaccines.

“May 27, Chengdu, Sichuan. People crowded together for vaccination in [Chengdu's] Xindu district, and many citizens were pushed forward by the flow of people,” it reads.

“According to witnesses, some residents heard that the Covid-19 vaccine would be no longer free after June 10, leading to chaos at the scene. Fortunately, police managed to maintain the order, and no accident occurred.”

Local authorities in Xindu district, subsequently said rumours that people would have to pay for Covid-19 vaccines were false, the Weibo post added.

The government response to the incident was published here on Weibo on May 28, 2021.