The video was published on Facebook on October 24, 2020. The post’s Arabic caption reads, “The French embassy was burned down on Monday in response to French President Macron's Islamophobic remarks.” 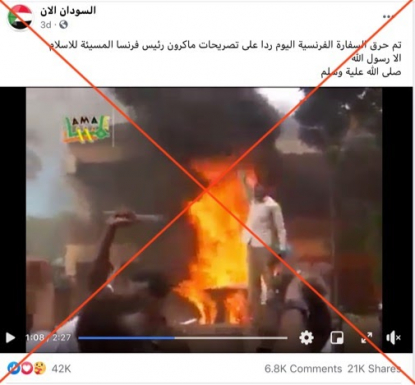 The same video was also shared in other Facebook posts here and here on the same date and with the same claim.

However, this claim is false. By conducting a reverse image search on keyframes from the video using the InVID-WeVerify verification tool, AFP Fact Check found that the footage dates back to 2012. Different parts of the video appeared in several news reports at the time.

The footage from 2’23 to 2’26 matches footage in an AFP report in German, published on the same date. Some of this footage is also repeated in other parts of the video.

AFP Fact Check was not able to find the source of the footage from 2’02 to 2’12; however, it features the same protester that appears in front of the German embassy in another part of the video (at 1’15) in footage featured in the Deutsche Welle report. 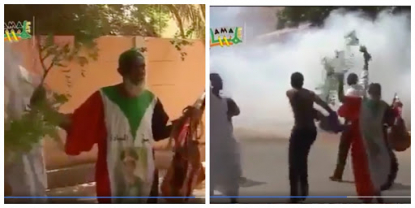 Screenshots of the same protester in front of the German embassy, seen in different parts of the video

All these video reports from 2012 show the same incident, which took place on September 14, 2012, when protesters stormed the German embassy in Khartoum.

At the time, AFP reported that the protesters set the building on fire in reaction to the screening of a film perceived as offensive to Islam and Muslims. The British embassy in Khartoum was also targeted. Fury over the film led to protests in many countries around the world.

Meanwhile, there have been no reports of any recent attacks against France’s embassy in Sudan.

The false claim was published on Facebook just days after the French president promised to intensify a clampdown on Islamist extremism.

Macron’s remarks came in reaction to the murder of 47-year-old teacher Samuel Paty, who was beheaded in a Paris suburb after he showed cartoons of the Prophet Mohammed during a class on free speech. These were the same images that sparked a deadly attack on the offices of satirical magazine Charlie Hebdo when they were originally published five years ago.

Macron has vigorously defended the publication of the cartoons on free speech grounds.

France’s interior minister Gerald Darmanin said that France was “at war with Islamist extremism” after a knifeman brutally killed three people at a church in the southern city of Nice on October 29, 2020.

The killings happened on the same day as a knife attack by a Saudi citizen at the French consulate in the Red Sea city of Jeddah, which left a guard wounded. Neither the Saudi authorities nor the French embassy gave a possible motive for the attack.