This video shows a muscular breed of beef cattle from Belgium

A video has been viewed tens of thousands times on Facebook and YouTube alongside a claim that it shows the hybrid offspring of a cow and a pig. The claim is false; the video actually shows a Belgian Blue bull, a muscular cattle breed from Belgium, and it has circulated online since at least 2014.

The 51-second video was being posted here on Facebook on February 2, 2021. 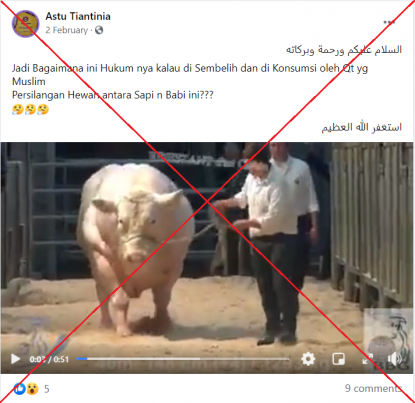 Translated to English, the Indonesian and Arabic post reads: “Peace be upon you

“So what is the law if it is slaughtered and consumed by us Muslims.
Cow and Pig Cross Breeding??? I ask Allah for forgiveness.”

The footage, which has been viewed more than 90,000 times, also circulated since at least 2017 alongside similar claims on Facebook here, here, here and here; as well as on YouTube here.

The footage was also shared with a similar claim in Malaysian language here and here.

Some of the posts claim that the cross-breeding is done in Australia and New Zealand for export to Muslim countries.

A reverse image search using InVID-WeVerify, followed by keyword searches on Google, found this YouTube video, which was posted on the channel of the Belgian-based Association Wallonne des Eleveurs (AWE), or the Walloon Breeding Association, on February 4, 2014.

The bull, which is named Resistant d’au Chêne, was born in 2009, according to the website of Belgian Blue Group (BBG), a Belgian-based company specialising in breeding Belgian Blue beef cattle.

The website also explains that the Belgian Blue breed originated from crossing the local Belgian dairy cattle with a Shorthorn cattle breed from the UK in the 19th century. After World War II, the breeding began to focus on development of the muscle structure.

Below is the screenshot comparison of the footage in the misleading post (L) and the original AWE video (R): 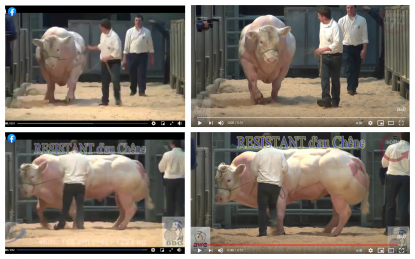 Other footage of Resistant was also posted here on the Facebook page of Blanc Bleu Belge, the Belgian White Blue, on April 5, 2014.