Skip to main content
A Pakistani policeman stands guard on the roof of the parliament building during a special parliamentary debate on whether to join the Saudi-led military intervention against Shiite Huthi rebels in Yemen in Islamabad on April 6, 2015. Saudi Arabia has asked Pakistan to contribute aircraft, ships and ground troops to its coalition fighting rebels in Yemen, the Pakistani defence minister said April 6, 2015. (Photo by FAROOQ NAEEM / AFP)

A video of a Pakistani female lawmaker speaking in parliament has been viewed more than four million times and shared tens and thousands of times in Facebook posts that claim that she was insulted by the speaker who called her “the daughter of a maid”. The claim is false: various television broadcasts and a transcript of the session show the speaker did not use any such words.

The 12-minute video was shared in this Facebook post on February 10, 2021. It has since been viewed more than 2.7 million times.

“Maryam Aurangzeb misbehaved with the Speaker. Speaker’s befitting reply. You are the daughter of a maid, you have forgotten your place,” the Urdu-language caption reads. 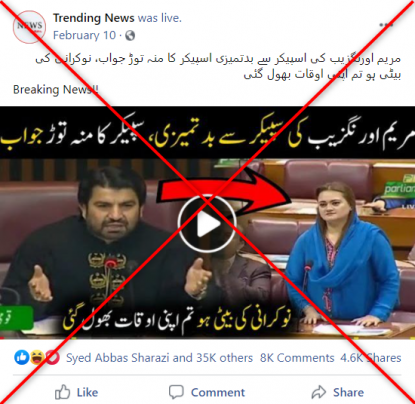 The same video with a similar misleading claim was shared here and here on Facebook.

However, the claim is false; at no point in the 12-minute video circulating online does the speaker refer to Aurangzeb as a maid’s daughter.

A reverse image search using keyframes from the video found it was recorded on June 24, 2019, when the parliamentary session was presided over by deputy speaker Qasim Khan Suri.

Various television broadcasts of the session from channels including 24 News HD and Samaa also show no reference to a ‘maid’s daughter’ jibe.

Below is a screenshot comparison of the video published by 24 News HD (L) and the video in the misleading Facebook post (R ):

A transcript of the parliamentary session held on June 24, 2019 also showed that no such remarks were made by the speaker when Aurangzeb was addressing the house.

Keyword searches, in Urdu as well as English, on Google did not find any posts about the alleged verbal spat between Suri and Aurangzeb other than the misleading posts.

Aurangzeb's mother, Tahira Aurangzeb is a lawmaker herself and not a maid, Dawn reported here.