A video has been viewed thousands of times in multiple posts on Facebook, Twitter and YouTube alongside a claim it shows a man throwing money to bystanders in New York’s Times Square after his friend died from coronavirus. The video, however, has been shared in a misleading context: the man who created the video said he was paying tribute to a friend who was allegedly shot dead. The video in the misleading posts has been created from two separate clips.

A reverse image search on Google of a keyframe from the first half of the video found the original clip published here on YouTube. It was shared on an account for New York-based jewellery store TraxNYC on March 21, 2021. 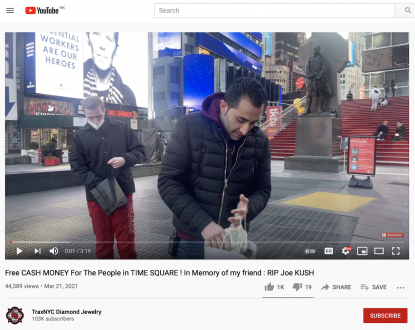 The video’s title reads: “Free CASH MONEY For The People in TIME SQUARE ! In Memory of my friend: RIP Joe KUSH.”

The video’s description reads in part: “Lost a great friend, great customer one year ago. RIP @thegod_joekush. All I know is he was shot dead somewhere in Detroit, probably over jealousy.”

The man in the video can be heard saying: “A year ago today a friend of mine died. He was a rain man. His name is Joe Kush. He got killed. And there were some pieces he made that he never finished...he was a dude that was making good money, and got killed for nothing. And I want to kinda commemorate him.”

“Joe Kush” refers to an American rapper, also known as Joseph Rivers, who used to be active on social media but has stopped updating all his accounts since March 13, 2020.

As of April 5, 2021, there's no official statement from his management team or credible media reports about the death of Joe Kush.

The man in the video corresponds with this LinkedIn profile for Maksud Agadjani, listed as the founder and CEO of Trax NYC. On his LinkedIn profile, he describes himself as an “Azerbaijani-born American businessman, and entrepreneur”.

Below is a screenshot comparison of the video in the misleading post (L) and the original YouTube video (R): A Facebook account for the same jewellery shop shared the same video here with a similar caption on March 16, 2021.

The caption makes no reference to Covid-19. 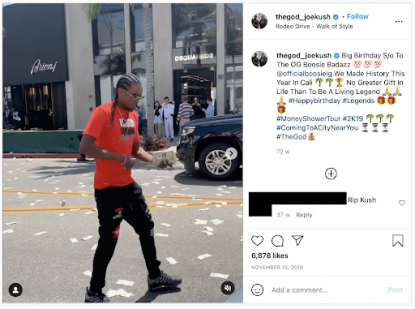 The video was tagged at the location “Rodeo Drive - Walk of Style”. The same location can be seen here on Google Maps.

The clip shows Kush throwing money onto the street as bystanders watch, while some rush to pick up the cash.

Below is a screenshot comparison of the Instagram video (L) and the video in the misleading post (R):